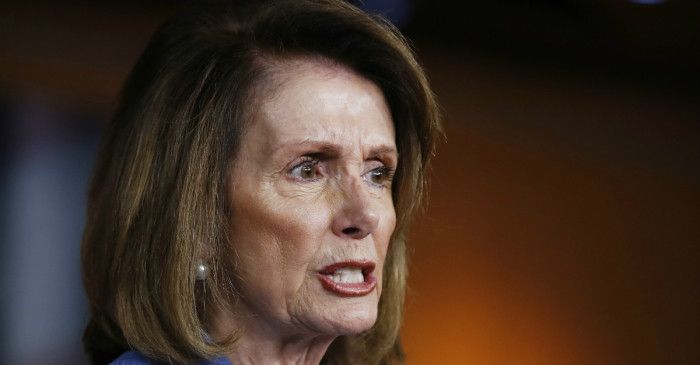 We all know that Nancy Pelosi is as out of touch with mainstream America as a politician can possibly be that isn’t named Hillary Clinton. And yet again Queen Nance proves her overt hatred of America, and specifically U.S. Servicemembers that have been wounded and/or lost their lives in the service of our country.

She’s said a lot of nasty things over the years about America and Americans, but she’s always given a pass by the leftist media as being “taken out of context”, or she was “misquoted”, or “she misspoke”.

This time is different. We’ve got her on video, during the 2022 State of the Union address. It was on live television, and millions of people saw it, so even Potato Head Brian or Jim Acostahole can’t deny this is real. Well, actually they more than likely will lie about it as that is what they do. Asking CNN, MSNBC, and the rest of the MSM to not lie is like asking a fish to not swim.

While contentedly chewing her cud or repositioning her teeth (or whatever it is she does with her mouth 24/7), Pelosi had been sitting behind President Biden, repeatedly jumping up and applauding after every sentence Biden nearly successfully completed. Then Pelosi, again, shows her true colors and sentiment about America.

Take note that even the rabid America-loathing V.P. didn’t stand up and applaud for this one. If Harris has the intelligence to know it was a horrible optic, Pelosi knew it was also and didn’t care. She follows her American-hating heart wherever it leads her and no matter where she is.

A gleefully smiling Pelosi awkwardly stood up while rubbing her hands in together in glee as Biden was talking about soldiers that had been stationed in Afghanistan and elsewhere being killed and injured while “breathing in toxic smoke from burn pits.” She was actually HAPPY that American servicemen died or were injured in the service of their country. Here’s the proof…

Look at this photo. Three smirking Socialists are seeing their dreams of a diminished and decimated America happening, and they are proud of their accomplishments, especially the dead Americans part it seems.

May Hell reserve a special place for these cretins.