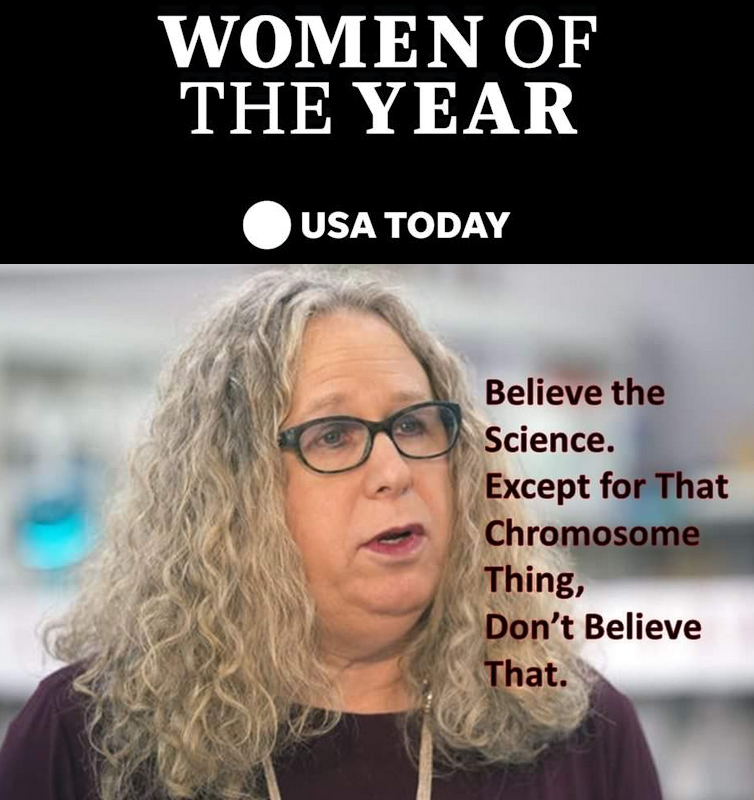 Richard “Rachel” Levine, USA Today’s “Woman of the Year” is a biological man, born Richard Levine. He identifies as a woman as do many trannies, but that doesn’t make it scientifically so. (In a whisper like Biden) The science. He also is a ‘four-star admiral’ in the US Public Health Service, which is an honorary title and is insulting to the decent men that have spent decades in the military and EARNED their rank of Admiral or General.

We don’t want to burst anyone’s bubble or spoil your LGBTQIA+2S celebration party, rain on your parade, or anything else to dampen that warm and fuzzy feeling you’re feeling right now.

We lied. Actually, we do want to burst your bubble, spoil your LGBTQIA+2S celebration party, rain on your parade, and anything else to dampen that warm and fuzzy feeling you’re feeling because it’s a manufactured, i.e. FAKE feeling. Levine was born a man and is a man scientifically and biologically. It’s that damn pesky XY chromosome thingy again. Again science rules over feelings. Furthermore, the fake “Admiral” is a political appointee, not a member of the U.S. Armed Forces.

This social experiment where we call men women, believe that small children are to be sexually identified and available, want to abolish fossil fuels without a replacement strategy, children can “choose” their gender identity at 3 or 4 years of age and start conversion therapy, and call abortion life-saving health care needs to end and to end now.

These games liberals play with everything is turning dangerous as they now believe it is a crime for parents to want to have some say in the educational requirements for their children and in the development of their morals and sexuality. They want to teach your children that men and women are interchangeable identities, that you can switch them as easily as changing socks. And they want to start the indoctrination process in kindergarten, even before introducing them to CRT.

This is in stark contrast to the National Education Association, the teacher’s unions, and most school administrators and teachers who firmly believe that only they are qualified to determine what your child’s educational needs are, what religious education they’ll receive (Islamic only), what history lessons they’ll receive (CRT). They’ll also be taught, starting in kindergarten, to question their own sexuality, to question their parent’s authority, and to report their parents for their “wrong” thoughts and/or ideas.

The same party that tells us that tens of thousands of BLM/Antifa supporters committing 250 days of riots, arson, assaults, looting, robbery, muggings, rape, killings, bombing federal buildings, burning police cars, open-air drug use, occupation of public property for months at a time, causing billions and billions in damage, didn’t really happen. We imagined it. All of that video of carnage and mayhem is the real fake news they are telling us.

Yet we are expected to believe the media/government narrative that a few hundred people on January 6, 2021, nearly toppled the U.S. Government? With no weapons. No guns. No swords. No tanks. No bricks. No bullets. No rockets. No shields. No missiles. No knives. No mortars. No slingshots. No grenades. No catapults. No barrels of hot oil. They didn’t kill anyone. They didn’t attack anyone. They didn’t burn any buildings down. They didn’t blow up police cars. They didn’t loot the local Walmart, Target, Walgreens and Best Buy.

And what exactly were their weapons of choice?  The most dangerous thing to a Socialist. Words and ideas. And the government says those people need to be burned at the stake if not drawn and quartered. All of them.

These are the people that are telling you that Mr. Richard “Rachel” Levine, USA Today’s “Woman of the Year”, is a woman.