For the Left, it’s never “enough”. They keep pushing the envelope and as long it’s not something Trump would have done, they’re all in, 100% for it, no matter how destructive the policy. Or if it’s in the furtherance of destroying our culture and replacing American society, then the Left is 110% all in. They’ve proven over the past 14 years that they hate the country, they hate freedom, they hate liberty, they hate, hate, hate. They are “Democrats” y’know.

A gay man pounced on the LBGT, and especially the trans community for their actions. And we agree with him 1000%. He has said what other fear saying in a public forum, and we’re shocked and surprised that Twitter kept the tweet posted. We grabbed a screenshot (at bottom of page) for posterity, because it surely won’t remain up for very long.

He goes by the name “TinFoil” on Twitter and is an open and proud gay man, or so one would ascertain from his header on his bio and presence of the LGBTQ+ rainbow flag. He has some interesting and salient words for the Left (i.e. Liberals, Democrats, Progressives, Socialists, Communists, all the same thing), and hopefully they pay attention to Mr. Foil, as he’s hit the nail on squarely on the head.

Here is the text of Mr. Foil’s message to the Left with the Twitter post following (corrected spelling):

A message to the left, from a gay man,
It wasn’t enough!

Oh you’re angry because of the reversal of Roe Vs Wade. Okay. You’re angry because you think they will come for gay marriage and gay relations. Okay. Let’s see whose fault is that per se? Any guesses? We’re looking right at the issue now… YOU.

All we gay, bi, lesbians and even some sane transgender people wanted was to be able to live our lives as normal people and blend in with the rest of the community with our partners. We got that back in 2015 and we were good with it. In fact, we were closing the fight after that.

However, for you it wasn’t enough. You sent your minions to a Christian Baker who just wanted to bake cakes and follow his belief in God. You didn’t want to go to the next store, you chose him so you could attack his beliefs. You did so so many times over I am surprised he’s still in business.

It wasn’t enough. You begin pushing Pride month where corporations would virtue signal by putting Pride labels on their logos. You pushed it in every tv station across America while they had to sit there and deal with the crap for an entire month. Yet the birth of our nation, July 4, only gets one day. Our veterans who fought for our freedom in this country only get one day.

It wasn’t enough. You pushed your way into workplaces and demanded that anyone who disagrees with lgbt needs to be silenced and fired just for voicing their opinion. All for equality.

It wasn’t enough. You then forced your way into the schools silencing and shaming any opposition. If anyone said anything, even us gay people, we were all silenced, shamed and even attacked at our workplace by getting us fired.

It wasn’t enough. You pushed your through convincing society that children under the age of 18 were transgender at the drop of the hat. They needed access to hormone blockers, and surgery! If people disagreed, they were bigots, transphobes, haters, EVIL!

It wasn’t enough. We now have trans people who transitioned at an early age and are now regretting decisions that have forever mutilated their bodies and their lives destroyed. Yet when they speak up they were silenced too and called transphobes.

It wasn’t enough. Now you have transgender activists calling out gay men that if they don’t want to accept trans men as men that they’re homophobic even though by definition being gay means attracted to the same sex, not gender. You called us homophobic, transphobic and attempted to silence us.

It wasn’t enough. Now we have teachers pushing LGBT ideology along with pornographic books and teaching about wild sex position while calling it LGBT sex education. When we called it out you call us nazis, bigots, homophobes. Now we have more Pride events with full nudity and very explicit actions being done in front of children. We have sex kink being brought in the mix in front of children. We have parents bringing their kids to Pride exposing them to this stuff. When we called it out you screamed the same names, transphobe, homophobe, nazi and then some. We see what you are trying to do. You’re normalizing pedophilia.

However, myself and many other sane LGBT peeps are calling you a$$holes out. We’re not going to let you do it. You destroyed equality for us, so we’re going to make your lives miserable. You’re not going to touch kids, you’re not going to keep this going. It’s ending now. we will call you out, expose you all to the world. When you start feeling that anger and hate flow toward you, calling us homophobe, transphobe, it is no longer going to work. You played your card too long and it ends. You only have yourself to blame because it wasn’t enough for you.

It won’t be enough for us until every single one of you are brought to some sort of justice. You’re pedophiles. You are the monsters in the shadow wanting to get close to any kid around. You want to pervert them so you can normalize grooming them. Nope. Not anymore.

Get ready because we’re coming for you. And we’re bringing hell with us just for you. There is no more discussion, no more reasoning, no more anything. YOU brought this on you all because it wasn’t enough. 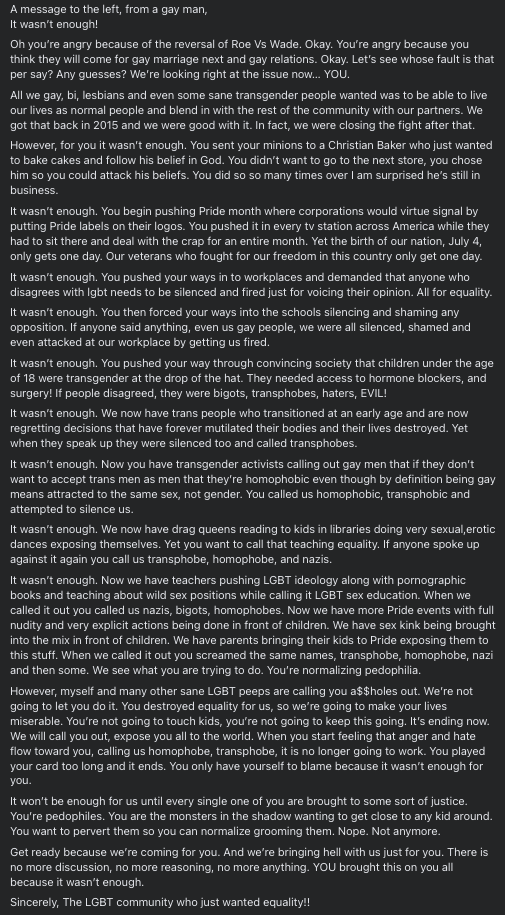