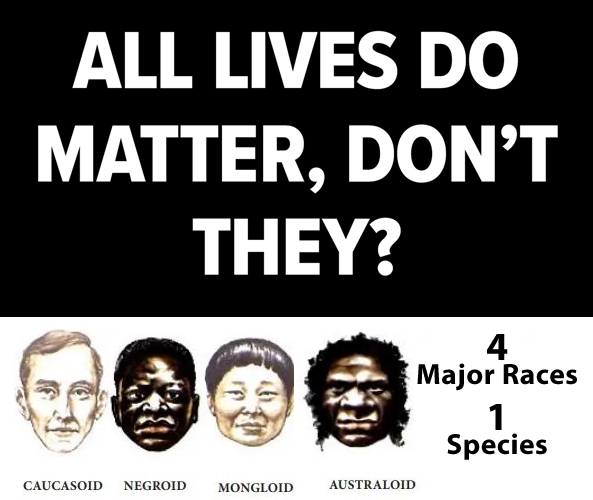 People need to get over themselves. We are all special. The Human Race consists of a single species, homo sapiens. That is further broken down, scientifically into 4 major races:

That is all folks. Live with it. This is SCIENCE. It’s not emotion, so there is no need to break out the puppies and PlayDough. Time to stop hating because of the skin color of one of your own species, which is akin to dogs having different colored fur.

So, to be perfectly and crystal clear, all human life is precious. We are ONE SPECIES. No matter how many ‘boxes’ you check.

Black Lives Matter only considers Black lives worthy of life. To them the life of white people and all policemen (regardless of race) as worthless, and Latinos only marginally more worthy. To them, only Negroids are worthy. That IS the name of their organization, it’s not just a slogan.

Yes, that is profoundly racist, yet they are allowed to be overt racists due to the fact that their own Black ancestors sold them as slaves to countries worldwide 200 years ago in North America, and much more recently is many countries worldwide. The US stopped slavery in 1865, though in many countries, it is still acceptable today to buy and sell human beings.

Again, ALL LIVES MATTER. Black, Brown, White, Yellow, whatever color you wish to ascribe to an individual. Black Lives Matter openly espouses the belief that only they are worthy of life and are destined to be the true masters of Planet Earth, after they get reparations that is.

We have to mention that being “Black” isn’t necessarily defined by your actual race. Sean King is a white dude that identifies and a Black man, and has even been the head of local NAACP chapters. Rachel Dolezal is a white woman that identifies and a Black woman. And for some odd reason, many people pretend along with Sean and Rachel and act as if they are really Black people.

And they are pretending, just as a “transgender” woman is really a biological man that is pretending to be a woman. Again just because you “check a box”, doesn’t make it real.