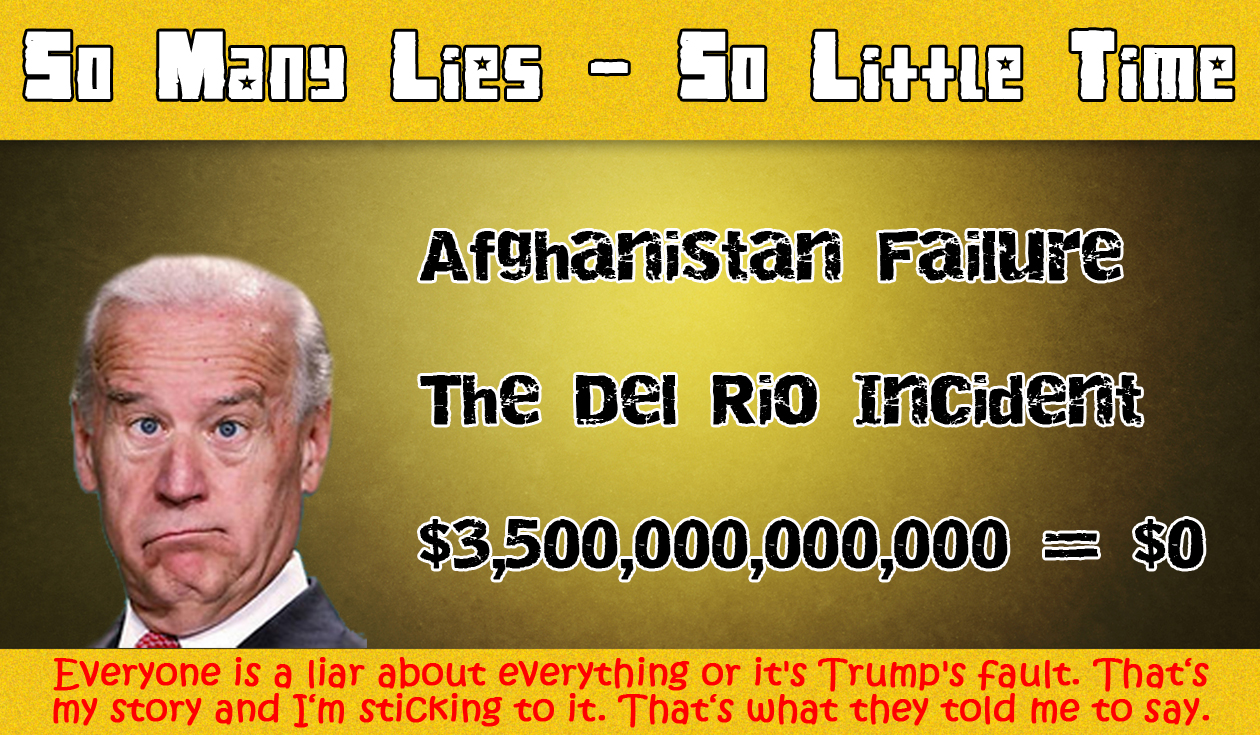 There are two occasions when a lie is not a lie. Never and when Pres. Biden opens his pudding hole. Now there are fibs, white lies, prevarications, exaggerations, manufactured outrage, falsehoods, dishonesty, partial-truths, equivocations, deception, and in the end, they all have the same meaning NOT THE TRUTH. NOT FACTUAL.

Yet, when you are the leader of the free world, you can skirt the truth, you can speak in grand language, you can bend reality, but to outright lie, continually? About anything and everything except the ice cream flavor of the day for the “Big Guy”?

Our president, his staff, his administration is educated in the arts of being untruthful, false, hollow-hearted, dishonest, disingenuous, mendacious, underhanded, perfidious, guileful, deceitful, two-faced, deceiving, double-dealing, duplicitous, dissembling, dissimulating, and outright look you in the eye and lie to you, the American people.

And they expect that you are stupid enough to not only believe it, but to embrace it as factual on its face. You don’t, and shouldn’t question their version of the story. No matter what they say about anything. All Hail Dear Leader Oba….errr Biden.

When President Joseph “Tali” Biden speaks, on any subject in front of any group of people (you can’t call the small groups he generates “crowds”) you can rest assured it contains more lies and hyperbole than facts and honesty.

Where do we even start? Granted Trump stretched the truth on a regular basis often with sarcasm and other humor, but he did not lie to our faces repeatedly, day in and day out about matters of national importance.

He did not insult our intelligence by spouting totally fabricated lies that we wanted, no needed, straight answers to. He treated us like adults and told us the hard truths, and 5% of America responded as woke children by burning and rioting and killing.

But Biden? He treats us like 3-year old children that you can’t speak to like an adult, so you have to make up simplistic stories to placate them

Hey Joe, we are not 3-years old sir. We are adults and deserve an adult answer, which is the truth.

We want to hear YOU explain why you lied to us about the following three events and why your stories (that you still are standing by) have been proven to be 100% false.

You call your top Generals liars and still stick with what they told you to get out of Afghanistan without securing American lives, assets, etc.

You call directing a horse with reins “whipping and/or strapping black men” and that the Border Patrol agents “will pay” for what they’ve done.

STEPHANOPOULOS: So no one told — your military advisors did not tell you, ‘No, we should just keep 2,500 troops. It’s been a stable situation for the last several years. We can do that. We can continue to do that’?

BIDEN: No. No one said that to me that I can recall.

Biden still maintains that Gen. Milley or Austin, the two top military commanders in the US, never told him to maintain a troop presence in Afghanistan until we got our people out. He has repeatedly denied that they told him this.

But Generals Milley and Austin testified in front of a Congressional inquiry and both testified, under oath, that they had informed the President named Joe Biden that he should keep troops there.

President Joe Biden read a news report from the New York Times, accompanied by a photo, that stated that US Border Patrol agents were running over with horses and whipping/strapping black men from Haiti, just like those evil white men used to whip slaves 165 years ago.

Biden immediately went on TV to give his “woke” opinion.

“To see people treated like they did? Horses running them over? People being strapped? It’s outrageous. I promise you, those people (Border Patrol agents) will pay.” – Pres. Joe Biden

Sadly, as Biden was embracing this new lie, the entire story was already proven to be patently false, with even the NYT eventually admitting the same. The border patrol agents had not whipped, strapped, beat, or run over anyone with horses.

The “whips” the NYT moron referred to are commonly called reins and are used to guide the horse, as they do not come equipped with steering wheels like our woke automobiles.

The border patrol uses the reins, i.e “whips” to control the horse so as to maintain a safe distance between the horse and people on the ground.

Has Biden never seen a Western movie? Rode a horse? Been on a ranch?

He is still insisting that the border patrol agents will be “brought to justice” and “pay” for their whipping crimes, days later.

And on this one, you actually told the truth as you’ve initiated disciplinary proceedings against them. Even after you were told they were not whipping anybody or anything. The photos, video, witness testimony, and the testimony of the photographer and journalist that wrote the story said nothing of the kind happened. But don’t let the actual truth, with photos/video/witness testimony, change your infantile little mind.

The Democrats Infrastructure bill is $3.5 Trillion of welfare and climate change boondoggles. Here is what Pres. Biden says of the $3.5 Trillion price tag:

This is a no-brainer, even for Libtards. Joe Biden is repeatedly telling us that his massive infrastructure bill, all $3.5 TRILLION of it, in reality, costs nothing. Zero. Nada. Not a single penny will the US taxpayer pay towards this massive welfare and climate change bill.

His troll, Jen Pissaki, is out repeating the lie during her daily lie fests, i.e. White House Briefing. Yet any idiot, and this includes all the idiots on the Left, have to realize that $3.5 Trillion doesn’t actually equal nothing and it also doesn’t grow on trees or bushes. Somebody, at some point, has to pay that bill.

But Biden and his people are lying about it every day as if it’s the Gospel.

Welcome to a “woke” and “Build Back Better” Amerika.