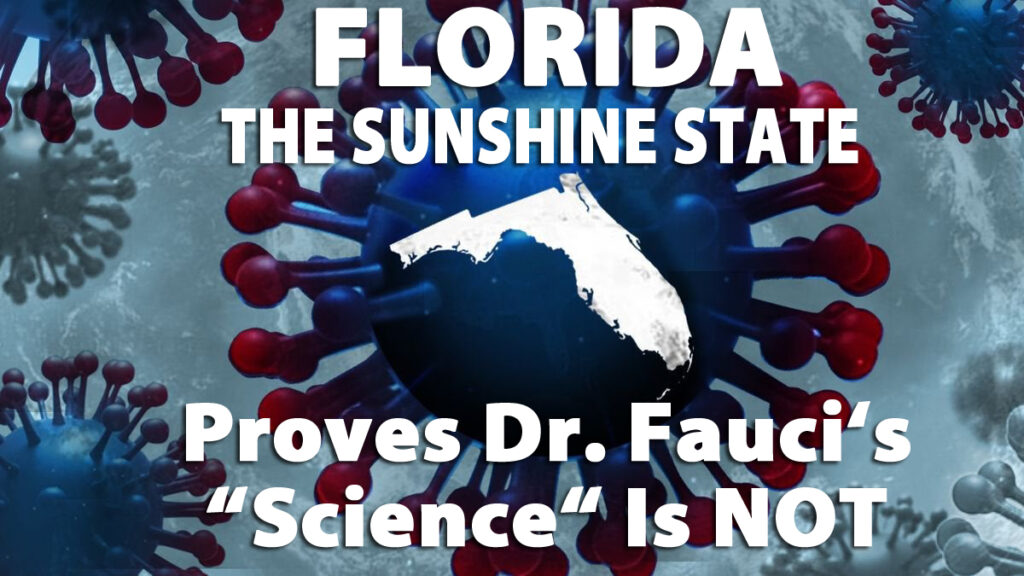 According to the Medical Lord thy God Fauci, most Floridians should be deceased by now due to the Wuhan virus. Floridians en masse didn’t listen to him, and in fact, they openly mocked and ridiculed him endlessly, and still do. One must understand that Florida is inhabited by millions upon millions of military veterans that have been taught to survive, to think for themselves, rationally and logically. You take all the facts, good and bad, then parse them out and make a logical and informed decision.

This is the antithesis of the Democrats/Socialists. Socialists mandate, demand, threaten, command, decree, bully, direct, sanction, instruct, dictate, order, and/or require. They don’t use logic and reason and they certainly do not follow science. They govern by Socialist ideology peppered with emotional pap. For them “follow the science” is a slogan, nothing more.

Fast forward to reality Democrats! You’ve been demonizing Florida Governor Ron DeSantis, and the fine people of Florida for months, calling Gov. DeSantis a killer and the Devil himself while categorizing the citizens of Florida as rednecks and inbred rubes that too are stupid to know whether or not it is day or night.

The New York Times toilet paper lauded Cuomo, DeBlasio, Whitmer, and Newsom as being the most intelligent, most caring, most medically astute people in the nation, next to Herr Fauci of course. For their glowing coverage, which was patently false, they won a Pulitzer Prize which they have not relinquished as of yet.

But it is time to give it a rest as reality is setting in. Even CNN and MSNBC are reporting that Florida has the lowest infection rate in the nation.

Repeat: Florida has the lowest infection rate in the nation. The lowest. Lower than all the others. Low low low.

For you science wizards on the Left out there, that means that the science shows that 49 of the 50 states have a higher Wuhan virus infection rate than does the State of Florida. That’s science. That’s a fact.

Does the New York Times have to report it also? No, they don’t. As they are not a news organization they have no moral, ethical, or legal reason to speak to the truth. They are bought and paid for Socialist propaganda.

Without mandates. Without lockdowns. Without draconian measures such as those enacted in California, Michigan, and New York, where their policies caused the deaths of tens of thousands. We were told by Dr. Fauci that we must lockdown. We must mandate compliance to his ever-morphing daily edicts. We must. We must. We must.

Well, we didn’t in Florida Herr Fauci. One of your predecessors named Mengele also liked to experiment on the human race, much as you do. You may not be as overt as he was, but you are as evil and as dangerous. You both serve Socialist masters, one German, one Chinese. Two peas in a pod.

May you rot in hell.