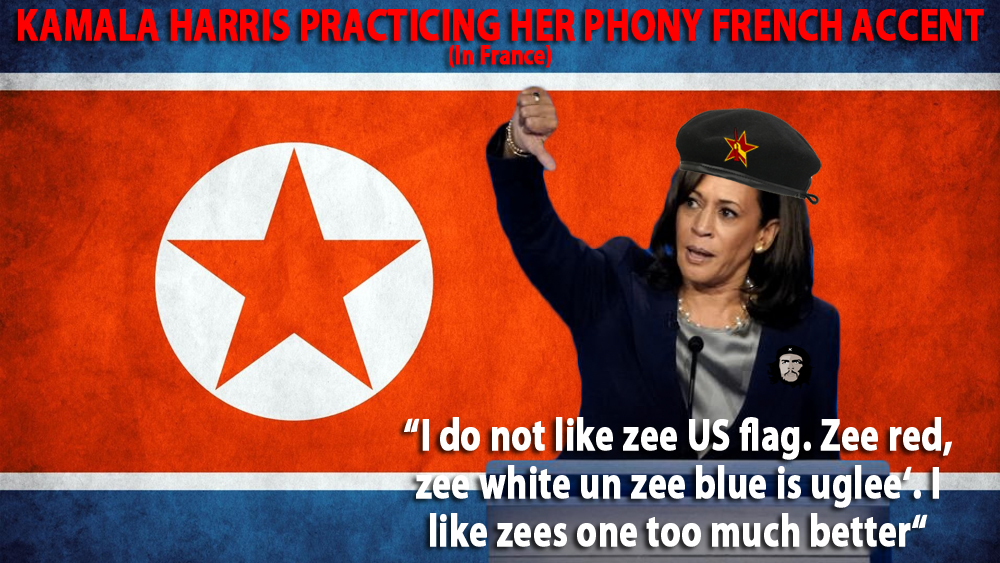 We know she is in France, and wish she would remain there for 3+ years, or perhaps forever? While she was there to play nice, she did the normal thing Harris does which is to act anything except normal. She just can’t be a real, down to Earth, honest person. That is not her. She’s as fake and phony today as she was then when she was on her knees telling Willy Brown she would love him forever if he would get her that $300,000 a year consulting job.

The MSM wants you to know that our extremely cringe-worthy Head-Cackler-In-Chief and US Vice President Kamala “Whichever Way You Pronounce It” Harris hob-knobbed with French scientists (theoretically some of France’s smartest people, smart being relative of course), and gave them a lesson on what a hypothesis is while using an awkward phony French accent, ala a Pepé Le Pew cartoon.

Harris’ took this trip to again stay away from America’s shores (THANK YOU Pres. Biden, and we meant it this time!) where the US public doesn’t want her anywhere near them. She is obstinately there to mend fences after America’s relationship with France hit a historic low after the US/British submarine agreement with Australia scrapped a French contract to provide the Australian navy with subs. (Thank you again Pres. Biden).

While in itself business is business, France is a NATO partner, and the US nor Australian governments never conferred with France about the upcoming changes.

Talk about cultural appropriation, Harris devolved into using a phony French accent while talking to actual Frenchmen/women, and she did it with a condescending smile, hoping they were not smart enough to know that she was mocking them to their face.

Harris went on a French-accented lecture to them stating “One of the things people in politics and government should really take from the approach of scientists — scientists operate with a hypothesis. I love that,” Harris said.

“A hypothesis. It’s well-thought-out, it’s well-planned, they start out with a hypothesis and then they test it out knowing invariably, you’re trying something for the first time, there will be glitches, there will be mistakes,” she went on.

“Then everyone gets together, no one gets beat up about it, you analyze it — what went wrong, re-evaluate, update the hypothesis and start again,” Harris added before mocking how politicians always stick to “The Plan.”

At that point, she seemed to switch to a very fake French accent while using the phrase “The Plan”.

“In government, we campaign with ‘The Plan,’” she said. “Uppercase T, uppercase P, ‘The Plan!’ And then the environment is such we’re expected to defend ‘The Plan’ even when the first time we roll it out there may be some glitches and it’s time to re-evaluate and then do it again.”

And not surprisingly, not a single Socialist MSM outlet reported on her using the French accent. Can you imagine the French VP coming to America, then visiting one of our top-level laboratories, and then speaking like a ghetto thug or a deep south redneck to our scientists? How would that go over?

“Is she using a FRENCH ACCENT?! I love this episode of Veep,” Abigail Marone, press secretary for Sen. Josh Hawley, R-Mo.

Can you imagine if Mike Pence had done the same? Or Donald Trump? The MSM would be relentless in demanding his resignation and/or impeachment. But there are rules for Conservatives and special (i.e. no) rules for Socialists.