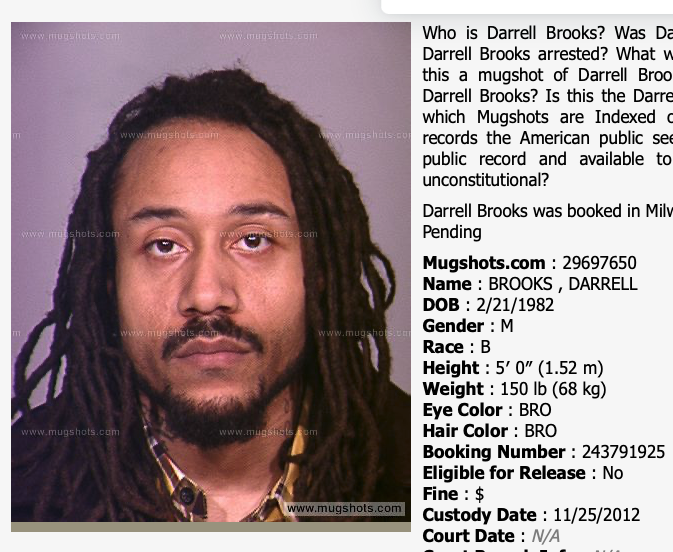 After killing 5 people in front of hundreds of witnesses and on video, Darrell Brooks is identified as a "Person of Interest" in the murders. Not a suspect mind you.

Darrell Brooks, 338 Maple Ave., Waukesha, WI, age 39, aka rapper Mathboi Fly, murderer of 5, black man, was released from jail 2 days before allegedly committing the 5 murders and running over 40+ other people. Yet he is only a “Person of Interest”. Nothing to see here. Move along. What can we say? This is a freaking joke after the show trial we just witnessed that was manufactured for the screaming mob.

Already the screaming mob has created a narrative for the MSM in that Brooks could possibly be the real victim in this mass murder, not just the driver of the offending vehicle. Brooks is the victim of a racist and corrupt justice system and a racist America that has oppressed and persecuted him. A look at his rap sheet tells you that he was targeted by the system.

UPDATE 1:34 pm EST: The MSM and authorities are still calling Brooks the “driver” and a “person of interest”. Are they going to charge the SUV with the murders? They say Brooks was running from a knife fight, so basically he was justified as he was running for his life? That is lame even by CNN’s standards. Harken back to the Rittenhouse shooting. He was immediately arrested, charged, called a white supremacist, armed for combat, militia member, and the media painted him as a racist murderer. Remember that? We do and it was 100% lies as proven during a fair and legal trial. Back to the Article.

UPDATE 4:48 pm EST: The authorities have charged Darrell Brooks with multiple counts of vehicular homicide OR multiple counts of first-degree intentional homicide. Differing language in the sources that are reporting is confusing as they carry vastly different sentences if found guilty. There may be additional charges filed due to the 40+ people that were injured, of which many are children and many are in critical condition in intensive care. Back to the Article.

UPDATE 11/24: It’s been days since a man named Darrell Brooks has been arrested, charged, and bail set at $5 million. His death toll stands at 6 now, with 62 injured. He told police he intentionally drove into as many people as he could. Yet CBS is still reporting that someone allegedly crashed a car into a parade in Wisconsin. Allegedly? No, there are thousands of witnesses and dozens of videos. Crashed? No Brooks said he did it intentionally. Someone? His name is Darrell Brooks. Wisconsin? The town has a name, Waukesha. Parade? It was a Christmas parade, which is for children. No mention of deaths or injuries. So the half of America that is Socialist thinks it was a minor auto accident due to the inability of the MSM to tell the truth.

As you can see, nothing to see here. He’s a fine upstanding young man deserving of all the compassion, understanding, and protection we can afford him. He committed all of the above crimes with peaceful intent, as evidenced by the fact that the police did not even arrest Mr. Brooks after the “incident”. Thousands of witnesses. Dozens of videos. How can they spin this one?

The MSM reported to the world that Kyle Rittenhouse drove for days while high on meth, with guns in the vehicle, to get to Wisconsin so he could shoot some black folks for fun. Of course, nothing could be further from the truth. The only truth in their entire narrative was Kyle’s name and the use of the word “the”. That is all that they got right in their reporting.

In reality, intelligent people all know that Rittenhouse drove for 20 minutes, not high on drugs, without a gun in his auto, and had no intention of killing “black folks”. In fact, he did not kill black folks. He was accosted by three white men with guns and ended up killing two of the white criminals that pointed guns at him while threatening to kill him (it’s on video people, you can’t deny it).

So how on God’s green Earth will the MSM spin this one? A Black man (Darrell Brooks is his name, not “person of interest”) purposely drove his SUV at 55 mph through a crowded parade with the intent to kill as many white people as he could. He did not slow down and in fact, on the video, you hear him gunning his engine and increasing his speed for maximum damage.

They start the spin immediately by refusing to name the “person of interest”. Note that he wasn’t arrested or cuffed, only identified as a POI, and they probably requested for him to come to the police station, at his convenience naturally, to please give a statement to tell them how the white people forced him to peacefully kill them.

No arrest? No name? No racial profiling? No criminal history? No nothing except “person of interest”? Nope. No way Jose. No good enough.  He has a name.

Darrell Brooks is only a “person of interest” after murdering 5 people and injuring more than 40. He’s not a “suspect” though, as that would indicate that he might have done something untoward. Black men are not suspects and are always innocent until proven guilty. White men are white supremacists and guilty even if proven innocent. Welcome to the New Woke Amerika.

If the Left used the MSM’s manufactured outrage tactics ala Rittenhouse on Brooks, he’d also be a white supremacist for killing white people, but they didn’t, and they are already carrying water for him this morning. Note how every other paragraph has a reference to Kenosha, Rittenhouse, or white supremacists, although none of the three are germane to these murders. See how that works?

The Left hasn’t even mentioned those that were mowed down and injured and killed. Brooks murdered 81-year-old Wilhelm Hospel, 79-year-old Virginia Sorenson, 71-year-old LeAnna Owen, 52-year-old Tamara Durand, and 52-year-old Jane Kulich, plus injured 40+ more, some critically. They are the victims, not the SUV’s “driver” as the media is calling him.