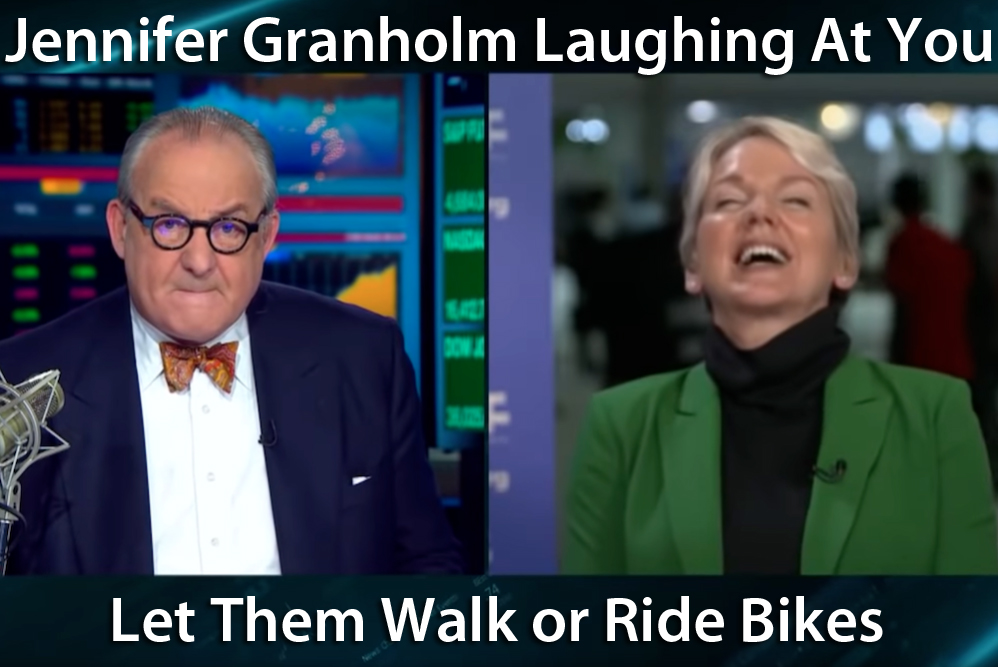 Just when you thought the Biden administration couldn’t get any slimier or more insipidly stupid, enter Jennifer Granholm, a rabid anti-fossil and nuclear fuel activist that invested heavily in “green energy” companies. Some of the companies she is promoting at SoE are EV companies, especially ones that she has stock or other “interests” in. But in the Brandon administration, conflicts of interest seem to be a prerequisite to hold a cabinet position.

Everyone remembers this cretin. Bloomberg Host Tom Keene asked SoE Jennifer Granholm that with gas prices reaching all-time highs on the West Coast, “What is the Granholm plan to increase oil production in America?”

“That is hilarious,” Granholm said, throwing her head back with laughter as Americans cope with rising prices at the pump compounded by inflation. “Oil is a global market. It is controlled by a cartel. That cartel is called OPEC, and they made a decision yesterday that they were not going to increase beyond what they were already planning.”

But most Americans remember long long ago (in the fall of 2020) when gas prices were well under $2 a gallon. Now they are approaching $4 a gallon nationwide and heading towards $6 in California. But that was under the Trump administration when we were 100% energy independent. Biden reversed all of Trump’s energy policies because he believes Americans are not paying our fair share of energy costs worldwide, and we should be paying upwards of $8 a gallon for gasoline, like some European countries.

But she thinks it’s very funny that we have to pay more. After all, we are the little people.

The administration canceled pipelines in the US, starts buying oil from China and Saudi Arabia again, and then promotes an oil pipeline going from Russia, around Ukraine, and ending in Germany. Germany used to get oil from us, until early this year.

Does anyone miss the mean tweets yet?

Granholm was told by President Brandon earlier this year to move the country forward towards a 100% electric vehicle transportation system. Her goal is to eliminate gas/diesel vehicles completely and not transition into, but in one fell swoop dive into EV’s totally. Shut down the gas, coal, and nuclear sectors because her buddy Mayor Petey has the answer to that by increasing windmill and solar panel purchases from China.

Now that the massive infrastructure package has passed, some Republicans are taking a look at Granholm’s incessant promotion of a Burlingame, CA-based electric bus company. It seems that Granholm sat on the board of directors of this company and bought nearly a quarter-million shares of Proterra, the company in question. She was finally forced to sell her interest in Proterra, 157 days after her nomination.

Remember Solyndra? The company that Obama invested BILLIONS of U.S. taxpayer dollars in? Solyndra was a manufacturer of cylindrical panels of copper indium gallium selenide (CIGS) thin-film solar cells based in Fremont, California. Heavily promoted by Obama as the leader in the Clean Energy sector for its unusual technology, Solyndra was not able to compete with conventional solar panel manufacturers of crystalline silicon.

Obama was told by nearly everyone in the industry that this was an expensive and unneeded investment as there were already more efficient and more cost-effective solutions available. Yet Obama’s “people” told us that we were living in the dark ages due to the Bush policies and needed to upgrade our infrastructure immediately.

How are we going to be an “electric car” country when we don’t have the electricity to meet that demand, and windmills and solar panels won’t cut it. Ask California and Texas.

Windmills are what, 15th-century technology? Seriously, these are going to ‘save us’?

And the solar panels are all made in China, by Hunter and the Big Guy’s people, and of which they have a financial stake in the companies that manufacture them.

But it takes electricity to make any of these things.

Why is that? Because they are woefully inefficient in all aspects compared to fossil fuels and nuclear energy creation.

If they were efficient and cost-effective (like the Biden admin says) then why don’t the solar panel and windmill manufacturers use their own devices to power their production facilities? That would be FREE energy forever for them, which would drastically reduce the cost of manufacturing.

But they don’t because they can’t produce enough power using their own devices to run their own plants. When they can do that, then it might be worth considering.

Granholm is using America to enrich herself, again. How many time are we going to allow public officials to openly mock us and tell us how much we’re going to have to sacrifice for the “common good”.

8 FACTS ABOUT THE SOLYNDRA/OBAMA SCANDAL YOU SHOULD KNOW

1. In 2009, the California-based green energy solar panel manufacturer Solyndra received a $535 million loan. The stimulus-funded loan, which was originally applied for in 2006 under the Bush Administration, was guaranteed by the Department of Energy.

2. While visiting Solyndra in May of 2010, President Barack Obama claimed Solyndra was “leading the way toward a brighter and more prosperous future.”

3. In August of 2011, The Washington Post reported that Solyndra shut down, “leaving 1,100 people out of work and taxpayers obligated for $535 million in federal loans.” According to Solyndra Chief Executive Brian Harrison, “Regulatory and policy uncertainties made it impossible to raise capital to quickly rescue the operation.”

4. The Solyndra controversy was elevated to a scandal when it was revealed that Office of Management and Budget officials felt pressured to approve the loan, despite an awareness of Solyndra’s financial instability. ABC News reported, “The deal later came under scrutiny from independent government watch dogs and members of Congress, which said the administration had bypassed key taxpayer protections in a rush to approve the funds — claims the administration has denied.”

5. Reporter Chris Good from The Atlantic wrote, “If White House officials handled taxpayer dollars irresponsibly for the sake of promoting Obama’s signature piece of legislation at the time, it would constitute a potential ethical lapse that resonates with criticisms against the stimulus and ballooning deficits.”

6. Questions about potential political motivations behind the special treatment of the Solyndra loan further fueled the green energy scandal. The Week reported, “The family foundation of billionaire George Kaiser, an Obama fundraiser, is one of Solyndra’s big investors. The GOP says that Team Obama interfered to speed up the loan approval, cutting short due diligence so that Vice President Joe Biden could announce the loan at the Sept. 4, 2009, groundbreaking of a new Solyndra factory being financed by that government cash.”

8. Thomas Pyle of U.S. News wrote an article on the issuance of new loan guarantees to additional green companies despite the Solyndra scandal. “Now here we are, $535 billion in wasted taxpayer dollars later, and it seems that the administration is intent on going full speed ahead. In fact, the president recently said in an interview that the Solyndra deal was ‘a good bet.’ Talk about a disconnect.”