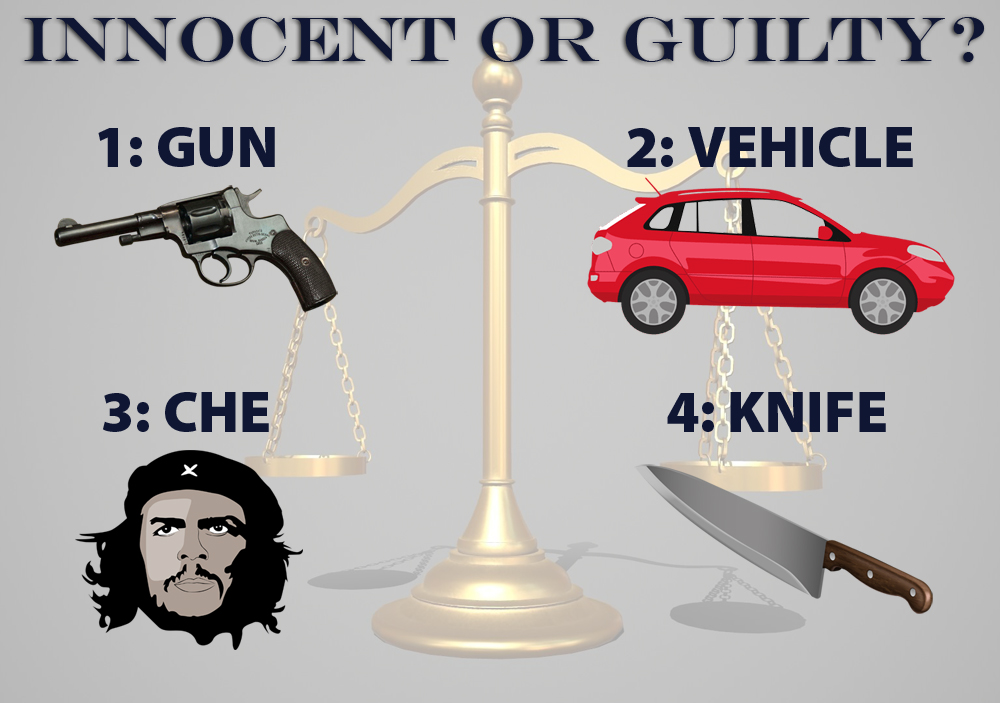 It really is a dystopian universe out there in “journalist land” these days. They take a simple, clear cut, with evidence, case and turn it around, rarely blaming individuals as being responsible for heinous crimes.

It was their upbringing, an incident in their childhood, a mean teacher, a schoolyard bully, an ex-wife/girlfriend, a bad employer, etc. that made them do it. It’s not their fault that they turned out to be who and what they are. Their decisions had nothing to do with it.

The excuses started long ago, but since the Socialists/Democrats and media joined forces a few years ago, it has reached a whole new level of incredulity.

The woke generation has already begun a wholesale reimagining of how we use words, and the definition of words themselves are being systematically changed/eroded.

Of course, along with that comes the reality of whether or not people can be responsible for their personal actions or if they can assign blame to inanimate objects, as is being promoted by the MSM in America currently.

GUNS
Oct. 21, 2021, Santa Fe County, New Mexico – Actor Alec Baldwin was rehearsing a scene on the set of his planned film “Rust” when a single-action revolver he was handling discharged. A projectile from the weapon fatally struck cinematographer Halyna Hutchins, killing her instantly and wounded another person. The interesting wording is that the gun he was holding discharged, which legally implies that basically Baldwin had nothing to do with the shooting. It was the gun’s fault. Of course, being a “B” actor, he put on a show crying, wailing, bemoaning the horrible tragedy, etc.

Fast forward a few weeks and several meetings with his lawyers. Baldwin is now claiming that he did not load the gun, did not cock the gun, did not aim the gun, and did not pull the trigger. Originally Baldwin stated he shot her and this was corroborated by witnesses. Alec Baldwin “intentionally” fired a gun toward cinematographer Halyna Hutchins on the “Rust” movie set, disregarding set protocol in the deadly shooting, according to a new lawsuit filed Wednesday.

“I saw Alec going through his movement with the gun for the camera,” said Mamie Mitchell, the script supervisor on set who called 911 when Baldwin shot and killed Hutchins and injured director Joel Souza on Oct. 21.

Baldwin, being the seedy actor that he has always been, is putting on a Slammies performance for us. His defense evidently will be that he was valiantly attempting to hold back the single-action revolver in question from cocking itself, aiming itself, and then pulling its own trigger thereby killing an innocent person and wounding another. What a man!

Steve Wolf, a movie armorer with more than 30 years in the business, said bluntly of the possibility of the gun discharging on its own, 1 being NOT POSSIBLE and 10 being PROBABLE: “One a scale of one to ten? Zero.” Added Wolf, “You know, guns don’t go off by themselves, right? It’s an inanimate object. It has no batteries. It has no timer. It has no web connection. It’s not a smart piece of equipment. It’s a very reliable device that shoots when you press the trigger, and it doesn’t shoot when you don’t press the trigger.”

It happened during a Christmas parade, a children’s event in Waukesha, Wisconsin on this fateful Sunday, and there were thousands of witnesses and dozens of videos. Darrell Brooks did not recklessly, with malice and aforethought, go on a rampage to kill as many white people as he could. That is just the evil Nazi Conservative lies. It was Brooks’ SUV, the Ford Escape that 2 weeks previous had run over his girlfriend, that started on its own, drove to the parade on its own, sped up on its own, and swerved back and forth hitting as many white people as it could, all on its own.

He is an innocent victim as much as any of the 6 people the SUV killed and the 62 that the Ford Escape injured. Brooks was valiantly fighting the SUV’s brake system and steering wheel, unsuccessfully it seems, attempting to keep it from speeding forward and swerving left and right, and hitting all those innocent wood….err white people. Think of the carnage that might have ensued if Mr. Brooks had not been able to wrestle the SUV to a stop. What a man!

KNIVES
On November 16, 2021, Palm Beach Gardens, Florida – The police found Ryan Rogers, a 14-year-old boy out for an evening bike ride, dead of multiple stab wounds. On Dec. 2, 2021, it was determined by police that Ryan Rogers was slaughtered by Semmie Williams, a homeless drifter (Leftist speak for the innocent victim of America’s inherent white racist system). But if you go to the normal MSM sources, you know the ones, they are reporting that Ryan was killed as the result of a knife attack. Yes, a knife just got up (who knew knives had legs) and for some unknown reason attacked Ryan, stabbing him multiple times, killing him instantly.

The murder had nothing to do with a 39-year-old homeless drifter named Semmie Williams, who apparently was valiantly attempting, unsuccessfully it seems, to hold back the knife from attacking Ryan. Think how much worse things might have been had not Semmie Williams shown up just as Ryan was being savagely attacked. What a man!

On an irrelevant side note, Mr. Williams has a Florida arrest record with more than 10 arrests, which includes multiple assaults and domestic violence charges, so this proves he had absolutely nothing to do with the knife attack. He never killed anyone before, so it’s all good.