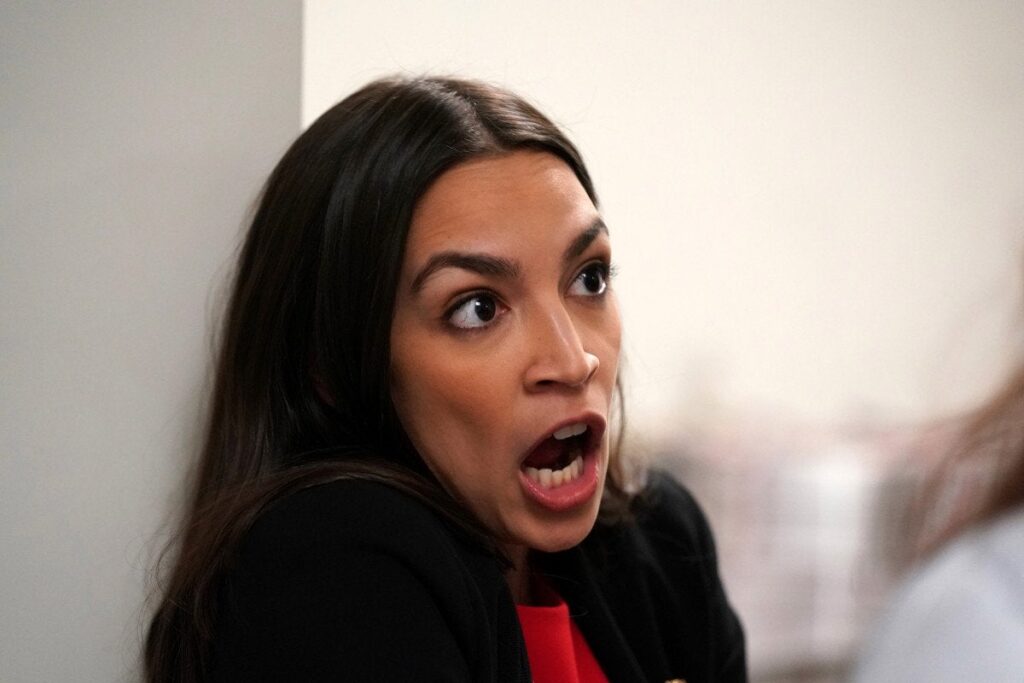 Her name is US Congresswoman Alexandria Ocasio-Cortez, aka AOC. That’s the only kind thing we can say about her. She has no other redeeming qualities and offers America nothing but her inherent racism towards and hatred of all things American with a particular fascination of and hatred towards Caucasians and their history.

She is also the enemy of reality. She repeatedly lies and/or fabricates narratives to attempt to bolster her tarnished image, and repeatedly fails, epically. This goes beyond being “woke” or a member of the racist Fascist group that calls themselves “The Squad”

Currently, Ocasio-Cortez is now publicly denying that there is any “smash and grab” crimes occurring in the US. “A lot of these allegations of organized retail theft are not actually panning out,” Ocasio-Cortez said in an interview with The Washington Times last week. “I believe it’s a Walgreens in California cited it, but the data didn’t back it up,” she added. Both of those sentences are out-and-out lies. There are dozens of videos of these organized theft rings looting stores often using caravans of vehicles to haul away the looted goods.

And as to Walgreens, they are closing over a dozen stores due to the unrelenting wholesale theft. California’s shoplifting law allows shoplifters to steal up to $950 worth of merchandise before being eligible for arrest. In addition, a policeman must witness them stealing the $950 worth of items even to be able to issue them a misdemeanor summons to appear in court for shoplifting. If a policeman witnesses someone stealing $951 or more worth of items they are subject to arrest.

Back to AOC. After she made her ridiculous claim, Walgreens and lawmakers pushed back and referred her to dozens of police reports and the thefts totaling tens of billions of dollars going unpunished.

Ocasio-Cortez has no clue as to what she is talking about. Empirical data and a plethora of video evidence paint a clear picture of what is becoming an ever-increasing epidemic.

In Democrat-led cities/states, crime is rampant because of no-bail laws, freeing violent criminals from prison/jails early, defunding the police, and lax enforcement of current anti-theft laws, and AOC is at the forefront of the defund and no-bail movements. She is also one of the most vocal proponents of closing prisons and jails and releasing all criminals on a promise of their continued good behavior. But of course, with no jails or prisons, what would be their punishment for recidivism? Take away their puppy for 2 days or they can’t play with their playdough for a week?

Cortez is a member of The Democratic Socialists of America, which touts itself as the leading Socialist organization in America.

“To me, what socialism means is to guarantee a basic level of dignity. It’s asserting the value of saying that the America we want and the America we are proud of …” Ocasio-Cortez said.

In an interview with Vogue magazine, AOC opined that personally to her socialism means “democratic participation in our economic dignity and our economic, social and racial dignity.”

You can’t fault her for being a Socialist. She is the product of the US education system, the NEA, and the teacher’s unions. They control the curriculum and they have been infested with Socialists for decades. Yet let us give a special thanks to the good people of New York City, specifically the Bronx and Queens, who voted this Socialist into office. It shows there are more Socialists in NYC than not. Cuomo? DiBlasio? ‘Nuff said about that.

Now let’s take a trip back into StupidLand with AOC! (These are all events that have transpired since she’s been a Congresswoman. Not in chronological order.)

She expressed amazement when she found out that if you put a seed into the ground and you watered it and it got sun that it could grow food! It’s a miracle! When did we find this out?

She was frightened in her new abode when she tried flipping on the light switch but instead of luminance (she didn’t use that word) there was a horrible growling noise. She said she had never in her life seen and/or heard of a garbage disposal being in a kitchen sink. What an idea! When was this invented?

She stood crying, looking longingly through a chain-link fence at……….. an empty parking lot. The photo-op was staged to show how much she cared for the children being housed at the border in the cages the Obama built.

She opined once that electing Democrats is what ended slavery.

AOC quote: “When people ask me ‘What does a world where we defund the police look like?’, I tell them it looks like a suburb.”

She also said that there are too many evil white males is why SHE isn’t Speaker of the House.

AOC quote about climate change: “I think the real question is, who DOESN’T think of the Allied victory over the Nazis when they think of ways to deal with global warming?”

If climate change isn’t addressed, people are gonna like die and stuff, y’know?

Another AOC quote, this time on the lack of available healthcare for snowflakes: “Well, you know, in this political moment, it’s so unique and sometimes I feel like I have this job of being something of a social worker or even a therapist in my district because this period has been so re-traumatizing for so many folks and especially in a country where we do not have reliable access to health care, let alone affordable health care”.
Now that she’s a big congresswoman, she’s left the shelter of her rich mommy and daddy’s home and got her own apartment. She bemoaned having to pay sooooooo much for her own place in D.C.

Another AOC quote: “We’re gonna flip this seat red in November,” Ocasio-Cortez said during a rally for a Kansas Democratic Congressional candidate. Honest mistake? Freudian slip and in Communist Red? Or just her stupidity leaking out again?

Stupid is as stupid does, and AOC does stupid better than anyone with the exception of VP Harris.