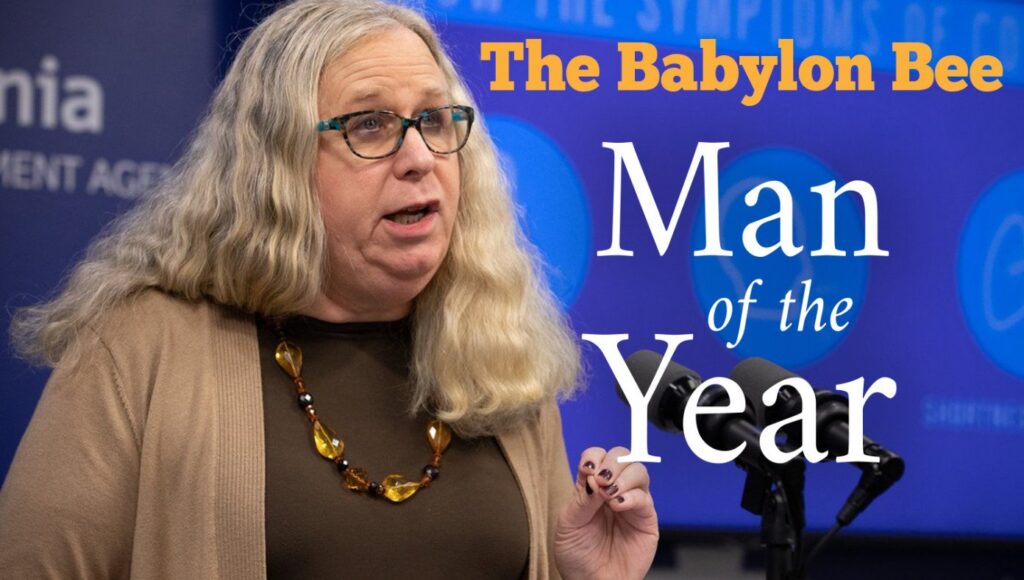 Babylon Bee CEO Seth Dillon revealed that Twitter had “locked out” the fake news publisher from its official account for alleged “hateful conduct.” According to the notice, Twitter suspended the Babylon Bee for writing: “The Babylon Bee’s Man Of The Year Is Rachel Levine.”

Isn’t “Man of the Year” the same as “Man of the Year”? Not according to the mainstream media. It really depends on who the award is bestowed by, Republican or Democrat, White or Black, Heterosexual or Transgender, USA Today or Babylon Bee.

Republicans, Whites, Heterosexuals, and The Babylon Bee are all evil, wicked, mean, nasty, and racist individuals. Democrats, Blacks, Transgenders, and USA Today are all decent, moral, wonderful, kind, generous, open-minded, inclusive, and caring individuals. That’s all you need to know.

The following is a reprint of the original article that got the Babylon Bee locked out from their Twitter account for “hateful conduct”. Nothing in the article is a lie, false, misleading, fake news, manufactured outrage, misinformation, disinformation, CNN “truths”, etc. It’s an article about a real man. The article:

The Babylon Bee has selected Rachel Levine as its first annual Man of the Year.

Levine is the U.S. assistant secretary for health for the U.S. Department of Health and Human Services, where he serves proudly as the first man in that position to dress like a western cultural stereotype of a woman. He is also an admiral in the U.S. Public Health Service Commissioned Corps. What a boss!

Rachel’s original name is Richard Levine, but he changed it to Rachel for some strange reason a few years ago. Who cares? Who says a dude as accomplished as this can’t be named “Rachel?” This king doesn’t care what people think about him! He often wears a dress, which some people think is weird—but he doesn’t care one bit. Come on! Men in India wear dress-type garments, don’t they?

Rachel’s message is to “be true to yourself,” and we couldn’t agree more. This man is breaking barriers and showing us all the true meaning of courage.

We applaud this precious and perfectly made child of God for all his accomplishments and hope he stays true to who God made him to be.

UPDATE: Since announcing this award, we’ve been told that Levine actually identifies as a woman. We have still chosen to give the award as his self-identification has no bearing on the truth. Congratulations, Rachel Levine!

USA Today named the same Rachel Levine “Man of the Year 2022” last week and it was met with much celebration and joy. It was the greatest award-giving since the Middle Ages. No person ever deserved such a prestigious award more than Rich… errr Rachel. But the question is why wasn’t USA Today locked out of their Twitter account for the exact same “hateful conduct” that the Babylon Bee was? The hateful conduct being naming Rachel a Man of the Year 2022.

The Socialist/Woke double standard is being applied upon society once again by the bought, paid for, and compliant mainstream media.