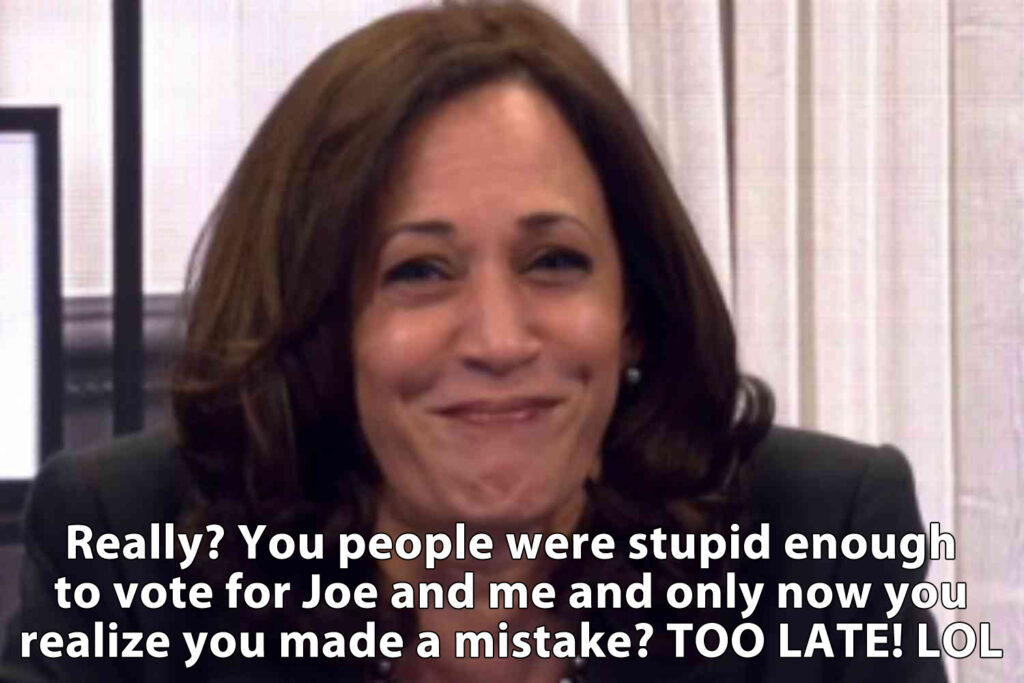 Kamala “Cackles” Harris, V.P. of the United States of America is a national embarrassment.

She was speaking to citizens of the small Louisiana St. Landry Parish town of Sunset about affordable and accessible high-speed internet.

So what does that incoherent statement mean? Does time pass with great significance? Just another word salad from the Vice President. She’ll go down (no pun intended, though fitting) as the absolute worst V.P. in history, even making LBJ and JRB look good in comparison.

After laughing at about 2 million Ukrainian refugees, you would have thought that her advisors would ADVISE her to STFU. But they haven’t. They allow her to prattle on about things she is wholly ignorant of, which is anything and everything.

“My mother used to laugh when she told the story about a time I was fussing as a toddler: She leaned down to me and asked, ‘Kamala, what’s wrong? What do you want?’ And I wailed back, ‘Fweedom,'” Harris wrote in her 2010 book “Smart on Crime.”

But “fweedom” is plagiarism in her case as it was a policeman that was with MLK and the policeman asked a little girl what she wanted and the little lady answered “fweedom”, and V.P. Harris stole that story and made it her lie for life.

Hell folks, she’s not even Black, even that’s a lie. She’s ½ Indian (The COUNTRY India) and ½  Black. Is she ashamed of her mother? Why not identify as Indian? Or Jamaican? Why Black? Of course, we all know why but just can’t say it out loud.

They also speak of her great intelligence, compassion, and that she’s a mature black woman with:

So Kamala Harris has superpowers to go along with the sexual prowess she used to seduce older men to gain political favors. C’mon man! She’s not that attractive so she had to use her other superpower “talents” she had available at that time.

Tags: Dumb as a rock kamala harris Stupid is as stupid does