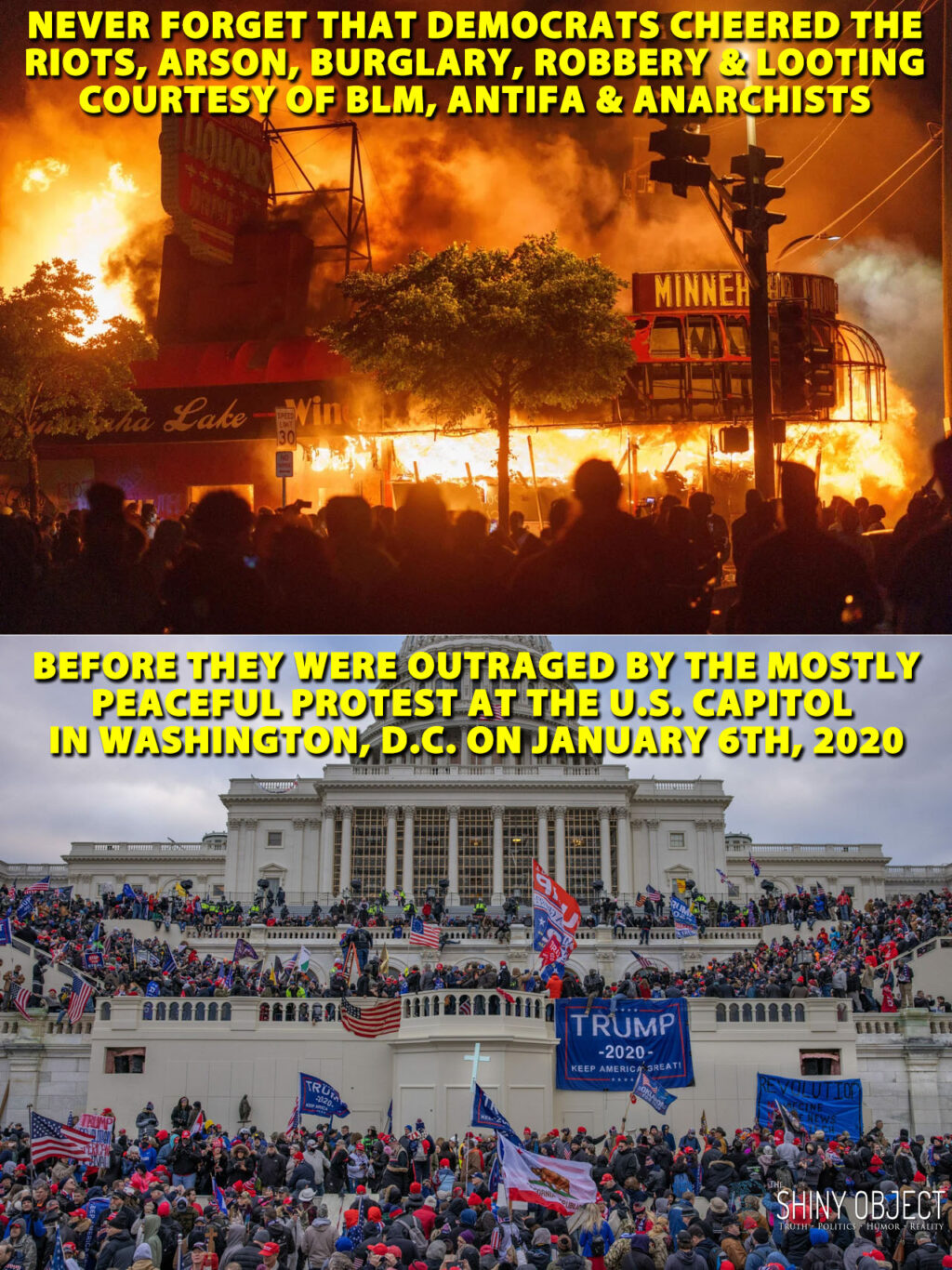 The riots in Oregon, Washington, Wisconsin, and other cities were planned by BLM and Antifa, and other anti-American Leftist factions for the sole purpose of creating havoc and mayhem. To stick it to the man. To show them what the “people” wanted. The people want every city to be ‘CHAZ’, the millennials’ dream society. Where you can eat, drink alcohol, do drugs, urinate and poo all in the same place!

Also, the taxpaying citizens will give you medical care, free food, cigarettes and alcohol, blankets, etc., and allow you to burn out the police from the police station or take over any city park you’d like. No problem. Looting a store before burning it down took these morons a few days to get the hang of. They actually burned many down and THEN went scrounging after

The Capitol protest of January 6th was spontaneous, spur of the moment, people got caught up in the hoopla and excitement. Yes, a few people went a bit too far. But the evidence has shown that the doors were opened by the police, and they invited people into the Capitol Building. Some mayhem occurred, but there were also 20+ government-paid inciters in the mix that were advocating for people to commit violent acts.

The only acts of violence were committed by Capitol Police who actually shot an unarmed woman just because they could. There was some property damage. There was no looting, no arson, no Molotov cocktails, no police attacked, no police cars torched, no long-term takeovers of the area so they could do drugs and party. It was a real protest by the people, and the Democrats don’t like for the people (who are not “their” people) to protest. Now you know.

Not a single Jan. 6th protester had a weapon of any type that day. Thousands of protestors and there were no guns, knives, clubs, baseball bats, batons, blackjacks, brass knuckles, bricks, Molotov cocktails, firebombs, homemade incendiary devices, etc. that were found among them. Yet these weapons are all hallmarks of BLM and Antifa ‘protests’, i.e. riots. They even have pallets of bricks brought in the day before and placed in strategic locations for the looters/rioters to access when needed.

Try as they might, they couldn’t pin incitement on President Trump and/or his followers, they’ve now pivoted to a new theory… Trump pre-planned the whole thing from the White House, which is conspiratorial in nature, something about a blank 7-minute segment on audiotape somewhere. They are reaching big time on this one.

And when this one fails to pass the smell test, they’ll bounce to the next “breakthrough evidence” and the new “bombshell theory”. It is what Democrats do. You’d know if you’ve been paying attention over the past 14 years. They regurgitate the same old outlandish talking points and outrageous accusations about every Republican candidate.

Remember the Democrat smears against Mitt Romney? He supposedly killed a lady. He supposedly strapped a dog to the top of his car. He supposedly didn’t pay taxes, ever in his life. He supposedly kept sex dossiers on all the women that worked for him, etc. etc. etc. All proven lies. But nothing was ever taken back. No apologies were ever offered. Democrats don’t apologize for lying as it increases their “street cred” with their base.

When you look at the photo at the top of the page, remember that the Democrats absolutely cheered on the rioters, funded their bail from jail, refused to press charges against them, and set them free in communities to continue fomenting hate and violence, which they are to this day.