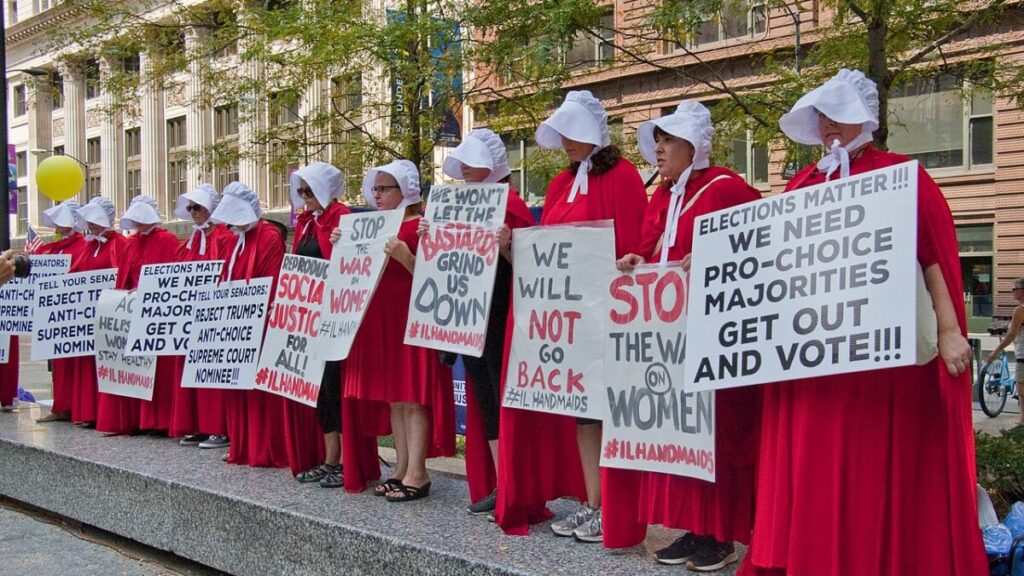 We have been assured that women do not exist as a distinct group and that the concept of women’s rights is obviously meaningless. Therefore there can’t possibly be a woman’s right to an abortion — or to anything else for that matter. How can a government provide resources and protection to a group that they insist doesn’t exist, i.e. women?

For years now the Left has been telling us that gender is an illusion, a societal construct meant to divide us. There really aren’t the 2 genders we’ve been aware of for tens of thousands of years, but there are, according to Leftists, at least 31 and possibly 50 or more. Oh yes, and it’s racist to question this narrative because everything is racist now, so just STFU.

USA Today recently crowed, “scientists agree there’s no way to clearly define what makes someone a woman.” So our neanderthal way of determining what a woman/man is, i.e a vagina or penis or scientifically via chromosomes in our DNA is no longer valid?  Men don’t have a penis and women no longer have vaginas. Our DNA has mutated?

Of course, this could all be true except for the fact that the “scientists” USA Today referenced are actually 3 pissed-off Twitter employees, 2 Facebook content moderators, and the new Fuhrer of the Ministry of Truth, Nina Jankowicz.

Supreme Court nominee, Ketanji Brown Jackson, a woman by birth and a mother of daughters, was asked to define what a woman is. She could not because according to her she is not a biologist. But she’s a MOTHER and refuses to admit that she is a woman. This is how far to the Left the Democrats have gone. they cannot face their own reality, yet they want to rule over you, not govern and lead you.

Note the Left no longer uses the terms ‘woman’ or ‘mother’ now when it comes to describing the people that gave birth to them. They have forsaken ‘women’ and ‘mothers’ for a hodgepodge of Leftist androgynous speak. We have been regaled with glorious tales of Mayor Pete and his husband ‘breastfeeding’ the twins they adopted from a WOMAN that carried both babies to term. (Hint – Men can’t really breastfeed, this is another Democratic societal construct).

Below are a few of the “genders” identified by Democrats, which are slowly being force-fed to the rest of us. How did humanity get by for tens of thousands of years with only 2 genders, i.e. men and women?

Androgynous: Identifying and/or presenting as neither distinguishably masculine nor feminine.

Bigender: Someone whose gender identity encompasses both man and woman. Some may feel that one side or the other is stronger, but both sides are present.

Binary: The gender binary is a system of viewing gender as consisting solely of two identities and sexes, man and woman or male and female.

Cisgender: A term used to describe someone whose gender identity aligns with the sex assigned to them at birth.

Dead name: How some transgender people refer to their given name at birth.

Gender dysphoria: Clinically defined as significant and durational distress caused when a person’s assigned birth gender is not the same as the one with which they identify.

Gender expression: The external appearance of a person’s gender identity, usually expressed through behavior, clothing, haircut or voice, and which may or may not conform to socially defined masculine or feminine behaviors and characteristics.

Gender fluid: A person who does not identify with a single fixed gender, and expresses a fluid or unfixed gender identity. One’s expression of identity is likely to shift and change depending on context.

Gender identity: A person’s innermost concept of self as man, woman, a blend of both, or neither – how individuals perceive themselves and what they call themselves. Gender identity can be the same or different from one’s sex assigned at birth.

Gender non-conforming: A broad term referring to people who do not behave in a way that conforms to the traditional expectations of their gender, or whose gender expression does not fit neatly into a category.

Gender questioning: A person who may be processing, questioning, or exploring how they want to express their gender identity.

Genderqueer: A term for people who reject notions of static categories of gender and embrace a fluidity of gender identity and often, though not always, sexual orientation. People who identify as genderqueer may see themselves as being both male and female, neither male nor female or as falling completely outside these categories.

Misgender: Referring to or addressing someone using words and pronouns that do not correctly reflect the gender with which they identify.

Non-binary: Any gender that falls outside of the binary system of male/female or man/woman.

Passing: A term used by transgender people which means that they are perceived by others as the gender with which they self-identify.

Queer: An umbrella term people often use to express fluid identities and orientations.

Sex: The classification of a person as male or female at birth. Infants are assigned a sex, usually based on the appearance of their external anatomy.

Transgender: An umbrella term for people whose gender identity and/or expression is different from cultural and social expectations based on the sex they were assigned at birth.

Transitioning: The social, legal, and/or medical process a person may go through to live outwardly as the gender with which they identify, rather than the gender they were assigned at birth. Transitioning can include some or all of the following: telling loved ones and co-workers, using a different name and pronouns, dressing differently, changing one’s name and/or sex on legal documents, hormone therapy, and possibly one or more types of surgery.

Transsexual: A generational term for people whose gender identity is different from their assigned sex at birth, and seek to transition from male to female or female to male. This term is no longer preferred by many people, as it is often seen as overly clinical, and was associated with psychological disorders in the past.

Two-spirit: A term that refers to historical and current First Nations people whose individual spirits were a blend of male and female. This term has been reclaimed by some in Native American LGBT communities to honor their heritage and provide an alternative to the Western labels of gay, lesbian, bisexual, or transgender.