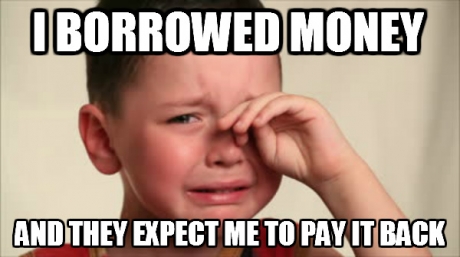 If our illustrious President loves veterans and people that didn’t go to college, why is he going to make them pay for the college debt of a group of people that agreed to loans to go to college so they can attain high-paying jobs?

And sadly, the resident “President” agrees with the freeloaders.

That just doesn’t make sense. I served in the Marine and mostly paid for my own college with a little help from the Corps (this was in the early 70’s). I could have furthered my education with a GI Bill grant, but it didn’t cover enough to attend without working full time also. I guess you can tell that I was an NCO, not an officer. Different benefits.

So I served in Vietnam and a dozen other countries and after 12 years I’m forced to take a medical discharge with a small disability (it was $110 a month). I went to work and worked for 35 straight years, supported a family, household, cars, college for my kids, and nobody paid a single penny of that.

Yet now these soft millennials that agreed to college loans now want ME to pay it back for them because they’ll get PTSD or have anxiety attacks requiring Play Dough, Puppies, Unicorns, and Rainbows if they are held responsible for their own actions.

What about all the people that couldn’t afford college, didn’t get a degree, and worked for decades? They’re to be deemed responsible to pay the loans of self-entitled degreed people that work at much higher-paying jobs than non-college graduates?

This is just another Democrat scam to buy votes in time for the November shellacking they see on the horizon.

Now all they need to do is immediately grant citizenship to the 20+ million illegals that have been here, plus the 5+ million Biden let in during 2021 and so far this year.