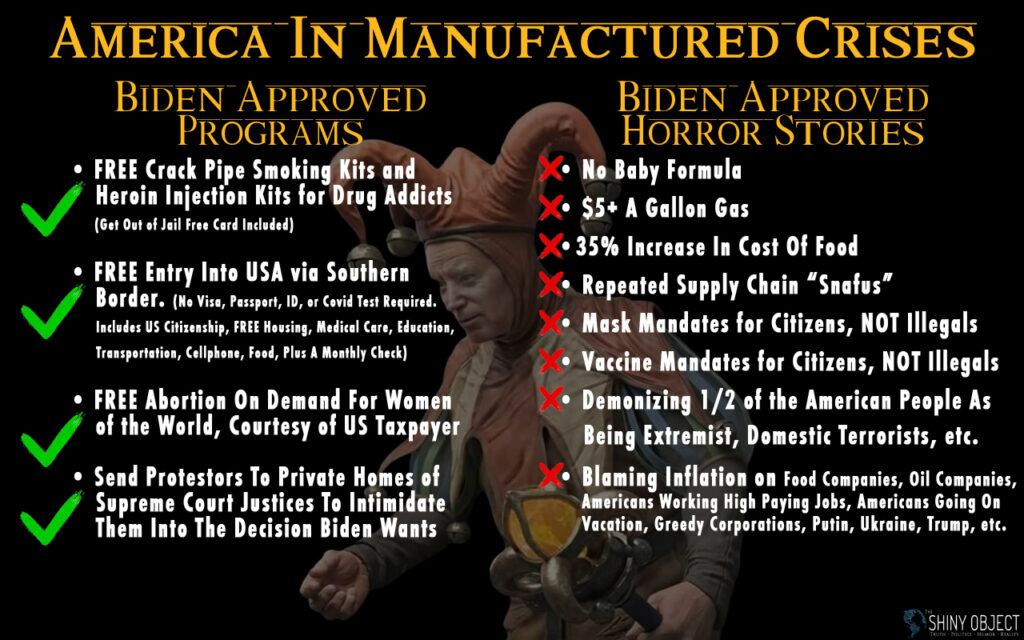 The headline is 100% accurate. Babies are literally starving in America, and Democrats are more concerned about the health of heroin, methamphetamine, and crack addicts over an American citizen’s 3-month-old baby. The disturbing part is that this is a manufactured scenario, again. Just like the “supply chain” crisis, and the “gasoline/diesel” crisis, this is wholly planned by the Biden administration.

Think about the fact that besides the Left is apoplectic over the prospect of possibly having some restrictions return on abortion, but now there is a shortage of baby formula? It tells me one thing. If the Democrats can’t kill ’em in the womb, they’ll starve ’em to death. How low the Democrats will stoop in their bloodlust to kill babies holds no bounds. Abortion or starvation? To the Dems it means the same thing, success at their #1 Priority… Killing babies.

They manufactured this entire scenario to benefit illegals and put them ahead of hard-working Americans and their families. Anyone with any common sense can put the pieces of this puzzle together. Increase the number of illegals by 3+ million people a year overwhelming the system. Let the felons out of jail, do away with cash bail, and give everyone a notice to appear in court, even for murder and mass shooting, as evidenced in New York City two weeks ago.

Give the drug addicts free paraphernalia along with a Get Out Of Jail Free Card (seriously) which means they are exempt from arrest, and where do druggies get the money to buy drugs? They steal, rob, murder, rape, and pillage, now with our government’s assistance and blessing.

The Democrats don’t like American babies and love to kill them because it takes 18 years to raise one and they all don’t turn out to be good little Socialists like they want. Many of them turn into decent, rational thinking, and intelligent people, exactly the type of people that Democrats abhor. So since they can’t kill all the babies, they’ll do the next best thing which is to kill as many babies in the womb as they can and then starve to death the ones that escape their abortion mills.

1. The Democrats shut down the largest baby formula manufacturer, Abbott Nutrition’s Sturgis, MI facility which supplied 43% of the baby formula in the USA. The government said that Abbot’s Similac or other formula sickened 2 babies, and killed 2 other babies, though they could offer ZERO evidence linking the Abbot facility to the deaths. It’s been shut down for months now and is still almost 4 months away from reopening, upon government inspection and approval. And as of yet there has been no link established between what befell the babies and the Sturgis facility. If the government can create a fake crisis to shut them down, they can find a thousand reasons to keep them shut down, to punish you, and to make you become a little more dependent upon the US Gov’t. Wait and see.

2. The Democrats bought up all the existing stockpiles from all the baby formula manufacturers and sent them to warehouses on the Southern border to be given only to mothers/babies illegally entering the USA.

3. The Democrats decided to provide crack pipe kits and syringe kits, which come with a for-real “Get Out Of Jail Free” card. Anyone using the government-supplied crack pipe or syringe kits is exempt from arrest by the police for using and/or possessing drugs.

4. The Democrats leaked an old draft opinion on Roe v. Wade which said it could be overturned. Within minutes thousands of protestors flooded the streets in Leftist-controlled cities with pre-made signs, handmaid costumes, etc., and then they doxxed the Conservative Supreme Court Justices, and the White House said that people should go to their homes and scream and shout like crazy people until they change their opinion to the “correct one”.

5. The Democrats need to create diversions, distractions, misdirections, false narratives, fake news, and whatever it takes for you to pay attention to the rampant inflation and the invasion of our southern border.

The White House orchestrated the pandemic, the fuel shortage, the open borders, the food shortages/supply chain snafus, the baby formula shortage, and is paying illegals to come to America, plus he’s giving them OUR baby formula. But understand that these are basically 100% Democrat voters once they get the free entry, free plane tickets, free housing, free food, free medical care, free education for their children, and free everything, courtesy of the U.S. Taxpayer. They’ll vote Democrat until the Dems find a new victimhood group to exploit.

Oh, and it’s against Federal law to threaten and/or intimidate Supreme Court Justices, which is what the Biden told protestors to do this past week. When do the impeachment hearings start?

18 U.S. Code § 115 – Influencing, impeding, or retaliating against a Federal official by threatening or injuring a family member