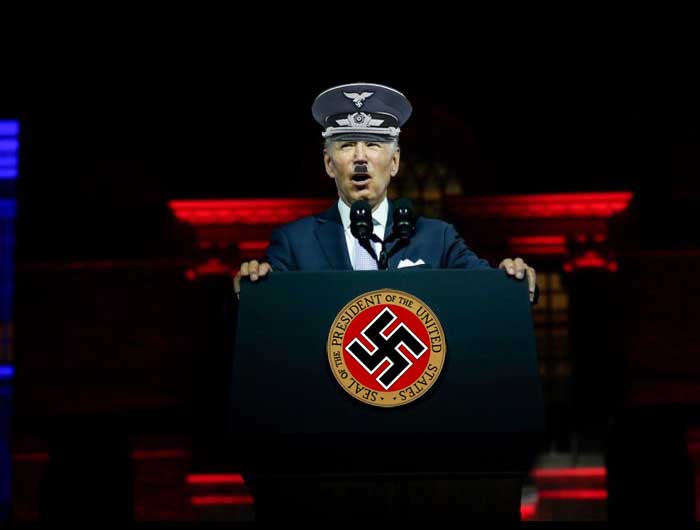 Der Fuhrer Joseph Biden, i.e. the Head Hater In-Chief, i.e. the Head Angry Old White Guy, has drawn numerous lines in the sand. He has identified the enemy, or rather more enemies to add to his list that is an existential threat to “democracy”.

To that point, who cares? America is not, and never has been a democracy. We are a republic.

Democracies be damned. That is socialism, before they turn to communism. Do they not teach der Fuhrer’s exactly how the US Government works at any stage of their lives?

So the enemies of America, or many of them, have been identified:

All those listed above are considered “extremist” by the current administration, their words, not ours.

What is an extreme position? I love hockey much more than basketball so that is extreme, so much so that I won’t pay to watch BB but will hockey. For that I need to be put down or locked up? Seriously?

But even though Adolf Biden issued his decree against anyone to the right of Stalin, he’s once again missed the mark. We are not the enemy. We are the people that he detests and that disgust him. YOU are the enemy. We are true Americans.

Der Fuhrer gave his diatribe to inflame his base against the Republicans, saying if they win in November all civil, legal, and human rights will be obliterated by the incoming Congress and Senate. No longer will there be health care, schools, food stores, gas stations, electricity, water… It’ll all be Gone In Sixty Seconds under Republican leadership according to Adolf/Joe. He basically called for violence and mayhem, again, just as he did back in 2000 during the ‘Summer of Rage’ over the death of a drug addict, multiple convicted felon that was high on fentanyl and attacked the police as they attempted to arrest him for counterfeiting/passing counterfeit money.

Why does Biden have this inbred desire to divide the nation, which he promised to unite? Why? Because he’s afraid of the results after 19 months of his reign. He’s been a complete and utter failure at everything he’s done. Let us count the ways, if you can count that high.

He could campaign on the economy since he continually touts how great it is and how much richer all of us have become since his coronation, but he can’t because it’s in the toilet. Inflation is totally out of control, gas prices are still over double what they were the day he was elected, food is almost unaffordable. So it’s a no go on running on the economy.

Or he could campaign on his foreign affairs victories, if he had one that is. He gave $82 billion in military hardware to the Taliban, while leaving hundreds stranded to die. He’s given Iran the bomb. He’s giving Little Fat Boy free reign to do what he wants. He’s financing the Palestinian Authority to send rockets and mortars and terrorists into Israel. America is officially the laughingstock of the world under der Fuhrer Biden.

Well, there’s always amazing job he’s done with education. Well, unless you count the largest decline ever in student performance on all subjects and all levels, except for Lesbian and Transgender studies that is. Or the fact that hundreds of thousands of students didn’t return to the classroom when they found out teachers pass them whether they learn or not. Everyone gets a diploma!

There is always the great work Biden and his people did in developing the Wuhan virus vaccine, except he’s lying again. His administration was not the one that pushed to have the vaccine ASAP. He in fact got two vaccinations for the Wuhan virus BEFORE he was inaugurated, but yet it was he who had it developed/manufactured? Liar liar pants on fire.

Then immigration and the border surely is his winning combination, eh? It is if you consider that in less than 20 months more than 5 million have crossed our southern border, without vaccinations, medical checks, criminal checks. They do get numerous checks, but from the Biden administration’s Treasury Department. They get checks to pay for food, clothing, medical care, education, travel expenses, housing, etc.

Hispanic voters at one time voted 90%+ for the Democrats and immigration reform are now one of staunchest groups against this invasion. Approval within the legal Hispanic community is around 20% for Democrats, down from about 80% for last Presidential election.

Surely gun control is something we can agree on. Guns need to be controlled much more than they are currently. The problem is that Biden believes that legal gun owners are the problem, the NRA is the problem. It’s not the criminals that steal guns and use them, they’re all good souls with the best of intentions. But you guys that stood in line, filled out the forms, waited to be approved, and paid for a permit, bugger off. They’re taking those back from you as soon as they can.

Abortion must also be a winning issue. Everybody just loves a cold, lifeless, dead baby, right? Wrong. A clear majority of Americans don’t, but nevertheless are not totally against all abortions. What’s more, most Americans don’t like being forced to pay to kill someone else’s baby, much less their own. Biden’s agenda is abortions should be available up until time of birth, and in some cases, post-birth.

Ahh, but there’s always racism. Every 2/4/6 years, this comes back into the forefront. Biden claims Republicans are inherently racist, always have been, always will be. But it was the Democrats that filibustered the 1964 Civil Rights Act for 60 days. They were dead set against giving Black Americans the same rights and benefits afforded White Americans. The Democrat Party was the party of the KKK, segregation, lynchings, slavery, and so much more racist behavior, but that doesn’t stop der Fuhrer from lying again and blaming his opposition.

Biden himself has a long, long history of making inflammatory and degrading comments towards and about Blacks. He was best buddies with avowed White Supremacists and KKK Grand Dragons, until it wasn’t “fashionable” any longer. Just remember, if you don’t vote for Joe Biden, then you ain’t Black. Biden’s own words.

So it must be the oppressed and suppressed trannies then? C’mon man. They’re the ones that need the most love, support, money, and programs out of all the American citizens. Der Fuhrer repeatedly tells us how important they are, how much they had to do with the formation of American culture, how “special” they are. He’s allowing grown men/transgenders to urinate (with their penis) and take a shower right next to your 6-year old-daughter. To not allow grown men to pee and shower next to little girls is being totally racist, homophobic and transphobic. Der Fuhrer believes that a 5-year-old should be able to choose their “gender”, yet you can’t drink a beer until you are 21? You can can’t smoke until you’re 18 but you can whack off your penis or undeveloped breasts on the musing of a child? You CAN if you’re der Fuhrer Joe Biden.

This is the Great Uniter, the Great Healer, the one who will Build Back Better. Nothing is built. Nothing is back. Nothing is better. Everything is worse and will exponentially get worse over the next 2½ years.

That is the one thing you can most certainly count on from this administration.