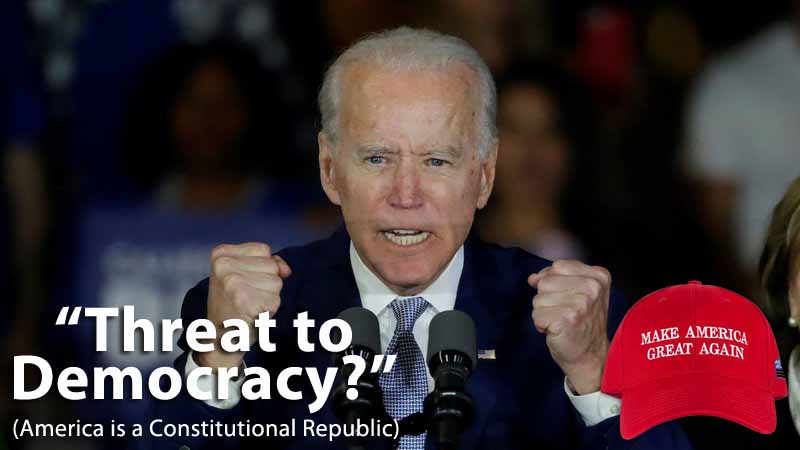 This fool’s statement is a total lie. Yes, 5 people died before, during, and after the demonstration, but only one was killed, and she was 100% unarmed and was murdered, i.e. gunned down by, a Capitol Hill police officer for the crime of trespassing. The others were heart attacks, etc., having nothing to do with that evening’s activities at all. But the Left and their compliant media don’t allow facts and truth to get in the way of a manufactured and false narrative, as long as it denigrates the “enemy”, i.e. conservatives.

A police officer dies of congestive heart failure 3 days after the protest, and it’s because of the protest? Seriously? That’s the Leftist science we’re following?

We have another word for it…. B.S.

So now anyone right of Stalin is a domestic terrorist. An existential threat to “democracy” (BTW, America is a Constitutional Republic, not a Democracy). An extremist. A white supremacist. A dangerous rabid radical that needs to be culled from the herd.

Now that the conservative threat has been identified, and it’s all of us on the Right, the killing of conservatives has now been sanctioned by the Democrat Party and their compliant media.

Tim Ryan, a Senate candidate from the Great State of Ohio issued a directive on Tuesday (9/13/22) that declared that Americans need to “kill and confront” the “extremist” Republicans. How is it that one of 2 major political parties in America is no longer valid. They are now a dangerous extremist terrorist movement and death is the only solution. Off with their heads.

Do not attempt a peaceful dialogue. Do not debate a bill or subject based on its merits rather than emotion and how much money you can give away. Do not stand up to the opposition using your platform.

CNN, MSNBC, NBC, ABC, CBS, NPR, WaPo, NYT, etc. it’s crickets. Total blackout on his comments. He didn’t actually say that, or he didn’t really mean that, or he was talking about some ‘other’ Republicans in another country or something? Nothing to see here. Move along now.