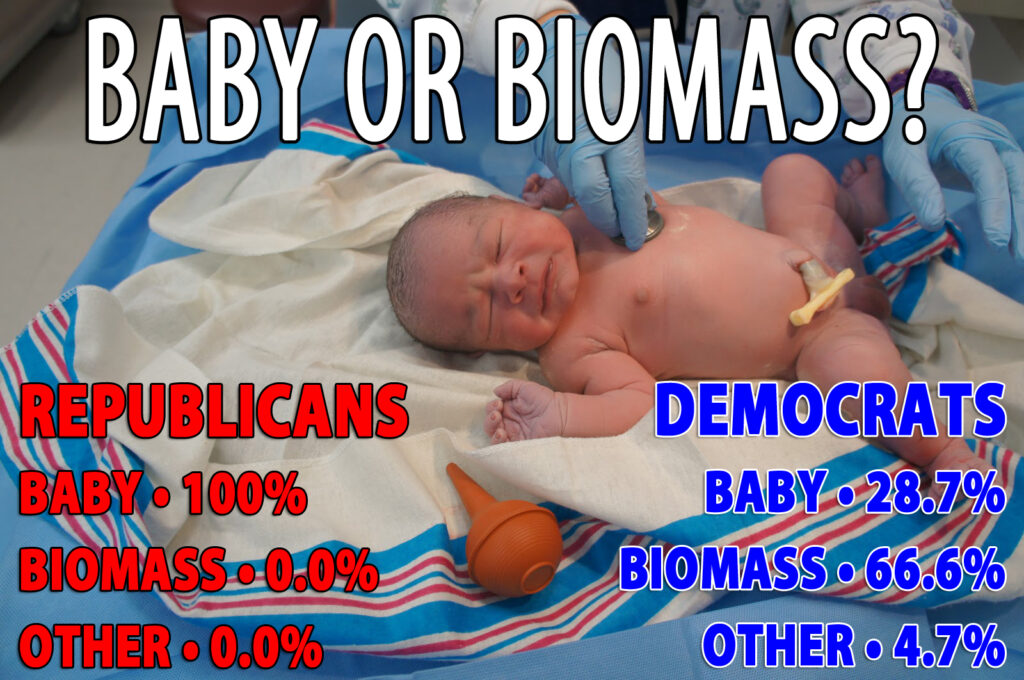 Look at the little boy in the photo above. He is absolutely gorgeous. A perfect example of a viable human being. Is there anything on this Earth that gives you more of a warm and fuzzy feeling than a newborn baby? How could anyone wish to harm this innocent human being?

That’s an easy question to answer. Join the Democrat party and he’s an instant target for you as he’s no longer a little boy. He is simple biomass.

Those of you on the Left think a little differently. This baby is mere minutes old, yet to you, 20 minutes ago he was biomass growing inside a woman, ripe for removal and disposal. Of course, after Planned Parenthood and other quasi-medical organizations cut off valuable parts to sell on the open market, the baby body parts market. Money money money money….MONEY!!!

The Left believes that before excretion that the biomass has zero value and zero rights. It is nothing. But if for some reason the poor woman lapsed and didn’t abort the biomass, she’ll bear a creature such as pictured above. What to do? It’s obvious, isn’t it? Well, it is for a Socialista.

The Democrats around the country are lobbying for a “grace” period for mothers to decide if they want an abortion. The Left actually wants a 24-hour period (why not3 day or 30 days?) that a new mother that is “uncertain” can decide whether or not she wishes to post-abort the biomass or keep it. This is commonly called infanticide, or to be more honest, mommy murder.

Some things are beyond belief. I thought the rioting and arson, (i.e. peaceful and non-violent protests) in the NW of the USA last year was untenable, and I was wrong. The Left has outdone themselves for insanity and hypocrisy.

The Portland, Oregon city council has enacted changes to its”bereavement” policy, which heretofore has been for women if they’ve suffered a miscarriage, stillbirth, or another type of pregnancy loss. Now they’re paying abortion bling.

When a woman intentionally kills her baby via abortion, she is now entitled to paid time off to mourn.  Leftists insist that abortion has nothing to do with a little human being, and it’s just biomass that is growing inside the woman and is evidently unwanted by the host.

So why give women time off for having a pregnancy loss when she is merely excreting/removing biomass that is not and has never been a baby/child/fetus/human, according to Leftist science.

What is apparent is that the Portland city council seems to recognize that biomass being carried as a result of natural or artificial insemination may indeed be a living, growing baby. Casa cerrado.

They’ve denied that human fetuses are living babies for decades.