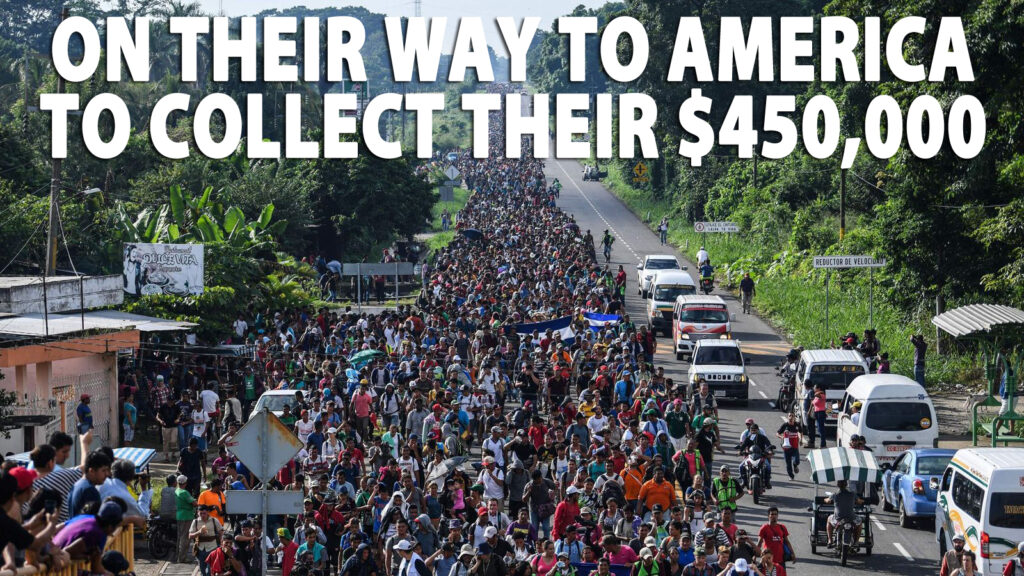 This is a group of approx. 90,000 illegals that are heading to the US border via Mexico.

Join the military and get killed four times.

Be wrongly imprisoned in Federal prison for 1 year, 8 different times.

Become a policeman/fireman and get killed in the line of duty a couple of times.

Other than that? Good luck. The government taketh away, not giveth to American citizens.

The Biden administration has determined that Trump was mean-spirited when separating MS-13 members (and other illegals) from women and children that they claimed were families (although most of the time they didn’t know each other’s names). So for the sake of fairness and equity Biden has decided that these previously separated individuals (2017-2019) are owed the princely sum of $450,000 EACH for Trump’s dastardly actions in protecting the US southern border.

Think about it, while you continue to work every day paying your 30%+ in taxes to the imperial Federal government,  these “families” can become instant millionaires for breaking our Federal immigration laws.

An analysis by the Federation for American Immigration Reform (FAIR) The FAIR analysis states:

It is unconscionable that they plan to do so during a time when tens of millions of Americans are struggling economically, remain unemployed, or are underemployed due to a sluggish economic recovery from COVID-19, as well as growing supply chain and inflation issues.

How did the Biden administration come up with $450,000? It seems as if Biden believes that these alleged “separated families” are worth 4.5 times more than a US Marine, Soldier, Sailor, or Airman that is killed in combat, as their families only receive $100,000.

If ever there were a single policy decision that shows disdain and hatred for American citizens, this is it. This is a slap in the face of all servicemembers that sacrificed their lives for us. It’s an insult to the first responders that are killed in the line of duty. It’s a disgrace brought upon America by its first Socialist regime, the Biden regime.

$100,000 – The amount paid to the survivors of a U.S. armed service member who dies while on active duty. President Biden is proposing that taxpayers give immigration lawbreakers 4.5 times more money than is given to the survivors of those who pay the ultimate sacrifice. [Emphasis added]

$400,000 – The maximum amount provided to the families of fallen military members who made payments into the Servicemembers’ Group Life Insurance program. Even in a situation where servicemembers pay their own money into a benefits program, their families will receive less than what a single illegal alien would receive from the federal government should this settlement take effect. [Emphasis added]

$50,000 – The amount paid to an individual who is wrongly imprisoned for one year at the federal level. Under this proposal, illegal aliens who did violate our laws would be given far more compensation than is provided to American citizens who were separated from their families for a year or more because of something they did not do. [Emphasis added]

$389,825 – The average amount provided by the federal government to the survivors of law enforcement officers, firefighters, and other first responders who die in the line of duty. Again, this is a much lower amount than what would be provided to immigration lawbreakers under this Biden plan. In fact, some illegal alien families could receive more than twice that amount.
[Emphasis added]

$250,000 – The maximum “non-economic loss” amount paid to 9/11 victims who contracted cancer from the attack. The maximum non-economic loss amount paid to those who suffered ailments other than cancer is only $90,000. Also, according to a Department of Homeland Security (DHS) attorney, some surviving families of individuals who died in the 9/11 attacks likely received less from the federal government than President Biden hopes to offer these illegal aliens. [Emphasis added]

So we now see what the US Government believes its citizens are worth compared to illegal criminal border crossers, which is much less.