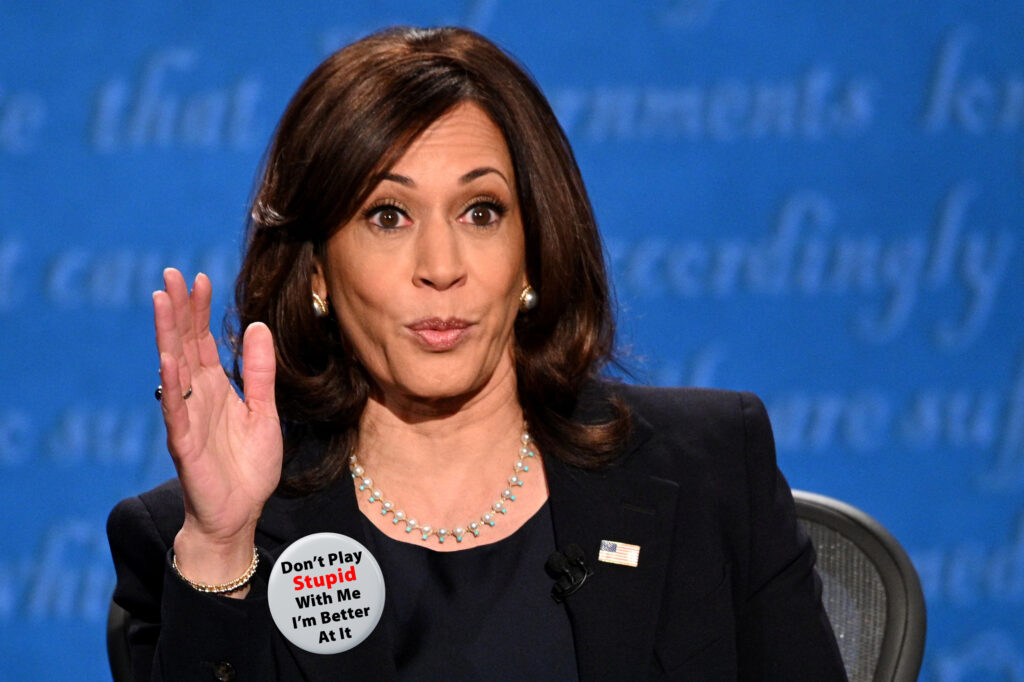 The media told us she was an effective and likable politician, she’s black, she’s Asian, and after Hillary Clinton, she’s the smartest woman on the planet. And of course nobody, not even her own staff believes that.

Even though she received ZERO support during her Presidential run last year, Biden inexplicably chose her to be his running mate.  If not for her acute political acumen, her likability factor, her minority race, her female gender, then there can only be one reason for that.

She is slower and more dim-witted than even Sleepy Joe is. She is no threat to even this cognitively impaired individual.

We all know the story of her ascent into politics, as seedy as it was, that she basically slept her way up the political ladder. It is not that uncommon for people to use sexual favors to garner positions of favor. As it were in today’s society, that can be considered benign behavior. Not necessarily moral and ethical, but it happens all the time across all strata of the work environment. Always has, always will.

Vice President Kamala Harris is more than normal in this regard. She’s as seedy, as slimy, as dirty as she needs to be to attain power, wealth, and control. She comes across as an arrogant, entitled, racist, and rich Socialist, which is exactly what she is. She’s willing to send people to prison for decades for marijuana while decrying the use of prisons to house violent felons.

But as Americans, we expect our leaders to exhibit normal behaviors in public while they’re supposedly serving us in office. Harris has done anything but. When asked serious questions about serious matters, she will invariably cackle before giving a canned non-answer. As it’s happened so often and is extremely embarrassing, the media has decided to simply not ask her an intelligent question.

They thought that would improve her chances of seeming “normal” to the average American. It didn’t. Harris merely pivoted to get her camera time. Note, none of this has to to with the US border which she is in charge of fixing. She refuses to visit the border or answer questions about it.

So when in France, Harris attempted to do what the French do, speak French. So since she doesn’t know any French she thought that by assuming a fake French accent that she would curry favor with the French scientists that were giving a lecture. It was a butt-cheek clenching moment. OMG, did the VP really speak to Frenchmen with a phony French accent? Yes, she did, and it’s on video.

And here is some of her eloquent, thoughtful, and intelligent fence-mending rhetoric, “We must together. Work together. To see where we are. Where we are headed, where we are going and our vision for where we should be. But also see it as a moment to, yes. Together, address the challenges and to work on the opportunities that are presented by this moment.” – Kamala Harris, VP of the USA.

That was only news for a few days as she attempted to embarrass herself and America further. This time VP Harris is at NASA, as a guest to attend a presentation. Not to speak and not to impart your opinions to the masses. She was there to listen and to learn, or more precisely to hopefully keep her mouth shut and not embarrass herself again.

But she just couldn’t do it. One would assume that as Vice President of the United States you’d at least ask intelligent, thought-provoking questions. And one would be wrong. With a staff of dozens, including writers, this is what they wanted her to ask NASA Scientists.

“Can you measure trees — part of that data that you are referring to, [and it’s an issue of] EJ, environmental justice — that you can also track by race their averages in terms of the number of trees in the neighborhoods where people live?”

Track trees and neighborhoods from space by race and correlate the data? Is that what she just asked some of the most intelligent scientists at NASA? Environmental justice by satellite? We have to ask the obvious. Is she on drugs? Is she a moron? Is she just a complete Leftist hack nut-job? Are trees now racist? Seriously? Tree equity? Environmental justice? Do Socialists really use these phrases as if they have a specific meaning?

“For the confused, the CRT argument here is that urban centers have less trees and are warmer than less urban areas, which the left translates into privilege. White people have the ‘privilege’ of more trees, cooler temps, and cleaner air,” he added. “Wala. Environmental Justice,” wrote conservative writer and commentator Chad Greene.

Everything is racial with our racist Vice President. Not enough trees are now oppressors of blacks and other minorities. This comedy continues at the Socialists have passed their $1.75 trillion entitlement bill which includes billions for, believe it or not, “tree equity” to plant trees in low-income neighborhoods. You can’t make this stuff up. This is our idiot VP trying to act intelligently. She also failed to tell us exactly how many trees each neighborhood must have to be equitable to humanity.

Huge fail. But at least she gave the world something else to laugh at us about. She’s made herself and the USA a laughingstock,

And to what do the V.P. and her staff assign blame?

Racism and misogyny! Everybody is racist and misogynistic against her because a) she’s a woman, b) she’s black, c) she’s Jamaican, d) she’s Indian e) she’s South Asian. According to her, those are a lot of reasons to dislike her.

It’s not her phoniness, her incessant cackling, her arrogance, her lies, her incompetence, or her lack of humility.

It’s because all of you are racist white supremacists, even if you’re black, brown, green, or blue. YOU ARE A RACIST!