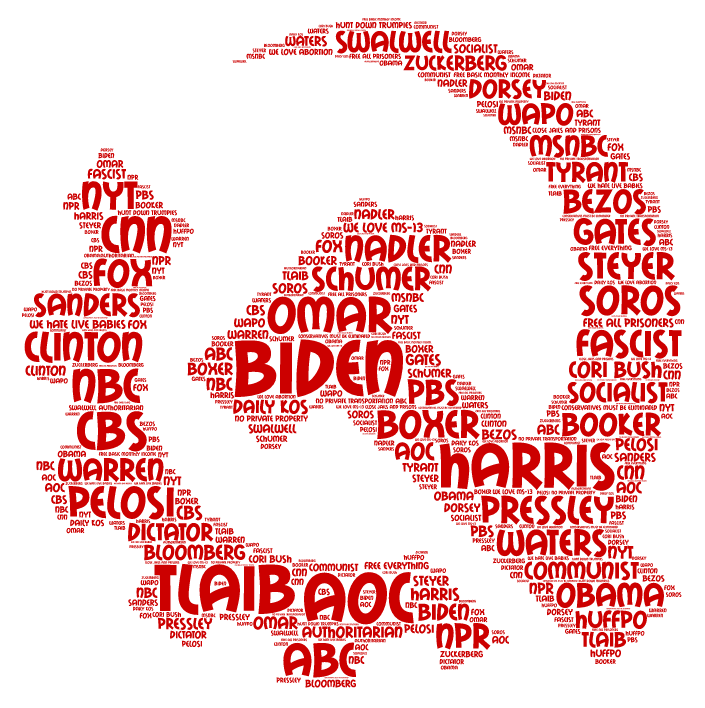 Then you have the inimitable Joe Biden, the 46th President of the United States. Biden is the quintessential American scumbag politician. A grifting, thieving, lying, money-grubbing, and power-hungry with an insatiable appetite for accolades, and requiring an ever-increasing stream of money to fund their lavish lifestyle.

Even when repeatedly being caught out-and-out bald-faced lying, he repeats the false tales. This man has no shame whatsoever. When someone repeats fantastical tales about oneself and deeds and continually embellishes or massages the facts, they either have come to believe their own fantasies or they are totally bat-shit crazy.

For example, Biden, more than any politician in office today, was joined at the hip with the old segregationist Democrat senators, such as former KKK recruiter Robert Byrd. He was in lockstep with every move they made.

So Biden pretending to be a civil-rights activist is about as authentic as his brilliant whiter-than-white teeth and his bad hair-plugs.

Are we allowed to mention his fondness for telling how devout of a Catholic he is, yet his administration’s main priority seems to be promoting abortion to the world, for free no less (in reality it’s abortion on demand for all women of the world, on the American taxpayer’s dime.)

Or what his incessant complaint over the years of him being “the poorest man in Congress”, while he owned several million-dollar homes, and lived like a king off of Hunter’s 10% for the “Big Guy”, which is now undoubtedly at least 20% as the “Big Guy” is now El Presidente. And we’re talking 10% of some deals worth more than a billion dollars. And he’s the “poorest”?

Biden elevates lying to another level, approximately the same level Hunter’s art is on ($500,000 a pop). His life of dedication to the American people, according to Biden himself, is a life of good deeds, projected strength, intestinal fortitude, a sense of duty to the country and family, love of all people and especially blacks, and a life of sacrifice for the greater good of America.

His life almost mirrors the North Korean leaders and their infamous deeds. Things like Kim Jong Il made 11 holes in one in his first and only foray onto the golf course, and immediately retired, naturally holding the world’s record. He also wrote a children’s novel each day and rode down to Earth from Heaven on a sacred white horse. He is also credited with inventing the airplane and the automobile in North Korean history. What a guy!

Much like Joe Biden’s self-professed history, it’s a history written in words, but ZERO evidence, other than taking the word of Joe Biden.

Reality or Fantasy? Did Joe Biden really march alongside MLK in the civil rights marches of the mid-’60s in Alabama resulting in his arrest? (There is no record of Biden ever being arrested in Alabama or any other state during a civil rights demonstration or for any other reason.)

Reality or Fantasy? Did Joe Biden really drive an 18-wheel truck for a living? (There is no record of him ever working as a big-rig truck driver.)

Reality or Fantasy? Did Joe Biden really beat up an entire street gang single-handed using only a length of chain? (There has been no evidence uncovered and no witnesses offered to support this story.)

Reality or Fantasy? Did Joe Biden meet the Israeli PM Golda Meir, at her request, during the “Six-Day War” in 1967? (Since Meir wasn’t the PM until 1969, this story is either a lie or Biden used Rocky & Bullwinkle’s “Wayback” machine.)

Reality or Fantasy? Did Joe Biden go to South Africa and end up being arrested in Soweto while on the way to protest for the release of Nelson Mandela? (SA police have no record of his arrest and Biden was not in SA at the time he says he was according to official records.)

Reality or Fantasy? Did Joe Biden really hit 368′ single during the Congressional baseball game in 1974, hitting the centerfield wall at the Old Stadium in D.C.? (Stat sheet says he grounded out and struck out and the game referenced was played at Memorial Stadium in Baltimore.)

Reality or Fantasy? Did Biden support Barack Obama on the raid that ultimately ended up taking out Al Qaeda leader Osama bin Laden? (No he didn’t, until 2015 when he started telling how he stood up to be counted as among those who supported the CIC’s decision to strike. Of course, this is contradicted by Jay Carney, Hillary Clinton, Leon Panetta, and others that were present that day.)

Reality or Fantasy? Did Vice President Biden pin the Silver Star on an American hero in 2008 in Konar Province, Afghanistan, even though the “Navy Captain” was vehemently resisting accepting the medal, saying he didn’t deserve it? (Nope, again Biden is lying. Barack Obama did pin a Silver Star on Navy Captain Kyle J. White, 6 years after Biden says he was the one that pinned it on.)

Reality or Fantasy? Did Joe Biden ride more miles than any other human on Amtrak while he was a Senator commuting more than 2-million miles, and supposedly being congratulated by Amtrak for it? (More lies as the timeline is pliable on the plethora of lies Biden has woven into this ever-changing storyline. He even tells lies about people who were dead when he says they said and/or did things.)

Reality or Fantasy? Did Joe Biden visit the Tree of Life Synagogue in Pittsburgh, PA after the October 2018 mass murder? (Biden told Jewish leaders on Yom Kippur that he spent time with the people there, consoling them, speaking with them. He is LYING. It’s now 2022 and he has not visited the synagogue to this day, Jan. 12, 2022.)

Reality or Fantasy? Did Joe Biden train as a racial activist in Black churches in the North and then hone his skills in the civil rights movement in Selma and Birmingham, again being arrested? (No record of any of this from training in Black churches to the protesting in Selma, and the timeline doesn’t work either.)

Reality or Fantasy? Did Joe Biden drop out of the Presidential race one time after being outed when he plagiarized a speech from British Labour Party Leader Neal Kinnock? (Yes, he did drop out after copying someone else’s speech and delivering it as his own, in a public forum no less.)

Reality or Fantasy? Did Joe Biden really expect us to believe that $3,700,000,000,000 (3.7 Trillion Dollars) doesn’t cost anybody anything? (Yes he did, and still does because he thinks a majority of us are knuckle-dragging Neanderthals that are stupid, stupid, stupid.)

Enough for one day. More to come…