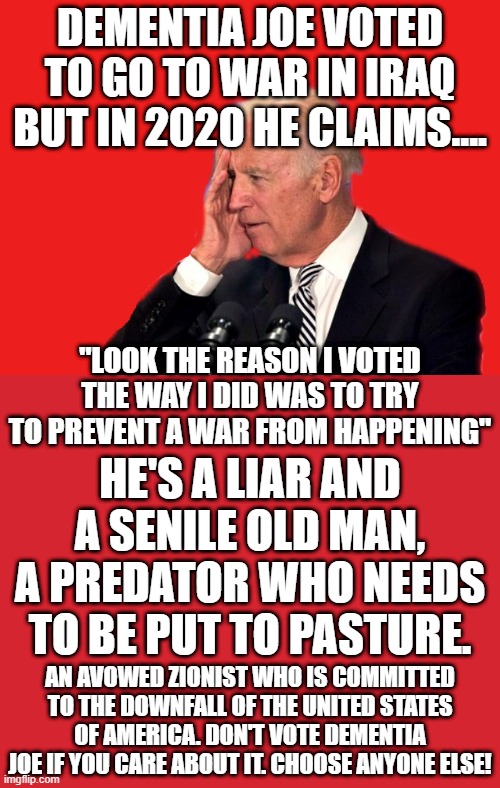 Biden can, and is, saying he didn’t say any of the following, but the facts are he did. It’s on video for God’s sake. How can he and his administration sit there and tell the American people that we’re so insipidly stupid that we actually didn’t hear what we really did hear? He can’t. He shouldn’t. They can’t. They shouldn’t. But he is and they are. And you are not stupid. They’ll find this out in November.

During the President’s “Start WWIII In Europe Tour 2022”, Biden indeed did his best to fan the flames of war, repeatedly, and with each exchange, it becomes more apparent that Biden’s “policies” are untenable. Yet the mainstream media and his administration are defending him.

They are perfectly willing to defend Joe Biden to our death. Now isn’t that a comforting thought?

“You’re going to see when you’re there, and some of you have been there, you’re gonna see — you’re gonna see women, young people standing in the middle in front of a damned tank just saying, ‘I’m not leaving, I’m holding my ground.”

Biden promises to use chemical weapons…

Question: “Could — if chemical weapons were used in Ukraine, would that trigger a military response from NATO?”

President Biden:  “It would re- — it would trigger a response in kind, whether or not — you’re asking whether NATO would cross; we’d make that decision at the time.”

“A dictator bent on rebuilding an empire will never erase a people’s love for liberty. Brutality will never grind down their will to be free. Ukraine will never be a victory for Russia — for free people refuse to live in a world of hopelessness and darkness. We will have a different future — a brighter future rooted in democracy and principle, hope and light, of decency and dignity, of freedom and possibilities. For God’s sake, this man cannot remain in power.”

But soon afterwards it was reported that each of those were obfuscations, misquotes, he misspoke, not what you thought you heard, blah blah blah. Just DON’T believe what you actually heard Biden say.

It’s time to pull the plug on this administration this November. Vote every single Democrat out of office, at every level. Otherwise, they just multiply like the dirty little rats that they are.