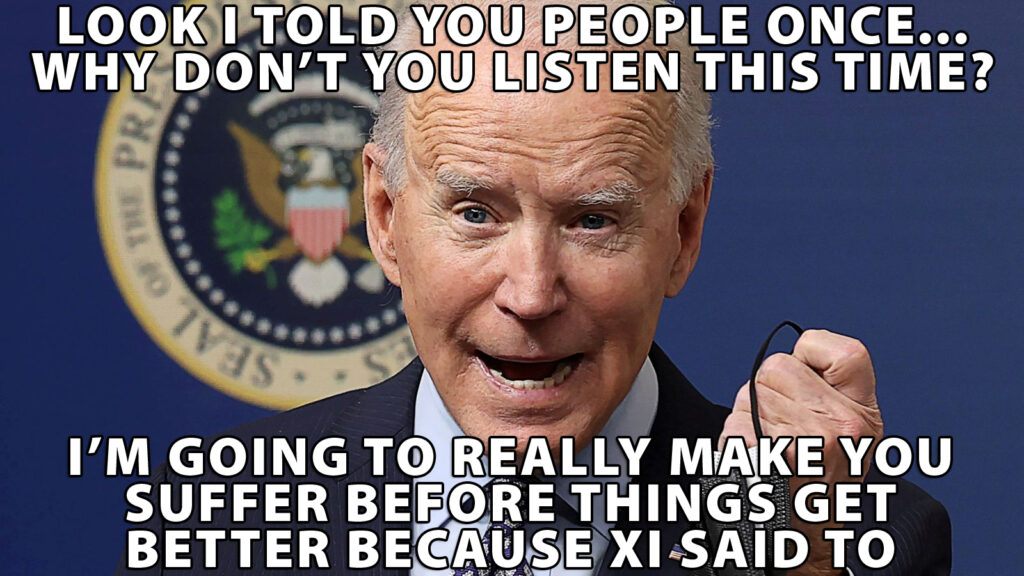 We are being fed a line of B.S. millions of miles long by the media and the Biden administration about Bidenflation, which according to Biden and the media, is actually non-existent. It’s a Trump-made myth spread by Russia Russia Russia.

First a dose of “real” reality, not Biden reality. The GDP shrank by 1.4% last quarter, while the administration constantly touts how quickly the economy is rebounding and how much better off financially we are than we were under Trump.

The Biden administration just released the latest inflation numbers and it’s an excruciatingly low 8%. I don’t know how anyone in the government can stand behind that number. It’s an out-and-out fabrication. How they can say it without laughing is a testament to how stupid they think the American people are.

Over the last 15 months, the Biden team has used dozens of excuses to Biden-splain the extreme cost of living increases Americans are experiencing due to mismanagement by his people.

Now we are being told that “inflation” is actually the fault of who else? Vladimir Putin. Biden and the media have dubbed the Putin Price Hike (PPH), which they claim has driven up food costs by as much as 15-25% in some cases. And you hear PPH PPH PPH PPH over and over and over in the media, and by Jen Psaki and her ilk at the WH.

We get 2-3% of our oil from Russia, and we have never stopped buying that 2-3%, so how does continuing to purchase Russian oil cause a ‘Putin Price Hike’? And even if, IF, we stopped purchasing this oil, how would a 3% decrease in oil cause a 25% increase in inflation? It does not compute on any level. But the fact is we still buy Russian oil every single day.

Yet this morning CNN was touting the Biden economy as strongly rebounding this year and is saving the American families money over the Trump years of depression and recession. They were saying how the rising costs due to first Trump, and then the Putin Price Hike, are now being managed by the Biden administration’s fiscal policies which are reaping whirlwind dividends for the American people.

It sounded like Pravda TV, FSB (formerly the KGB) rhetoric, Xi Jingping lying, the Chinese Communist Party, anything except American TV. It was as if the personality on the camera really believed the lies he was spreading. And that is possible. These people making millions don’t feel the pain that working people with families, the poor, or retired people do. These are the people that suffer the most.

And the elites continue to ridicule and malign us for complaining about paying 350% more for food and 136% percent more for gasoline, two things that most people require to exist. It must be nice to live in a gilded cage protected from reality by money.