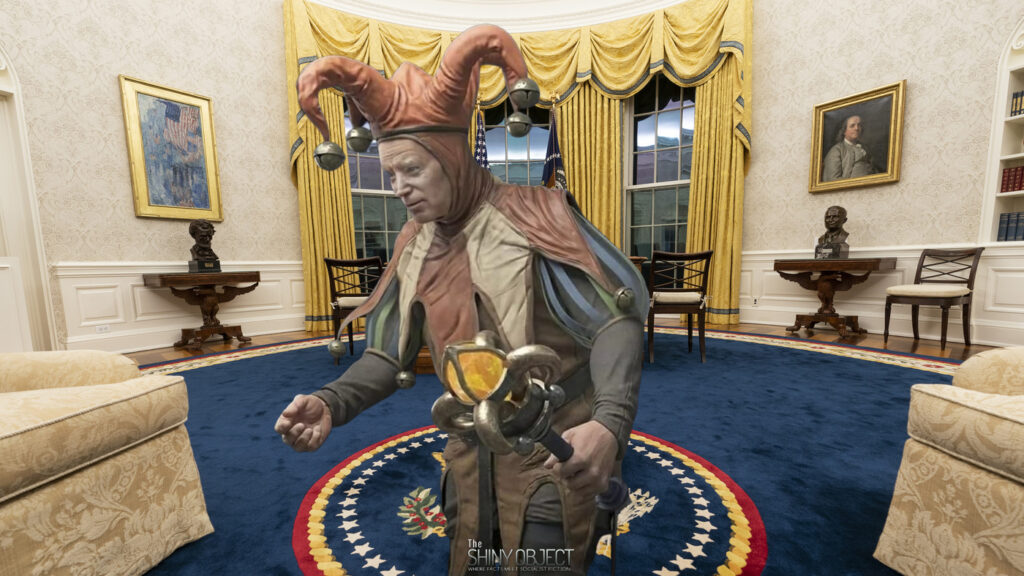 The Oval Office Jester is looking for the door to the Oval Office but just keeps going in circles. He keeps forgetting what he's trying to do.

Joseph Robinette Biden, 46th President of the United States. May God help us all. He clearly hates half the country, and can’t lie his way out of saying this, though he already said he didn’t say it.

What do we really know about Joe Biden? Verified demagogue. Verified liar. Verified racist. Verified cheater. Verified plagiarist. Verified enabler of criminal activity. Accused of sexual misconduct by several women and his own daughter. Is on numerous videos feeling up and/or sniffing the hair of ladies and of young girls clearly without their consent.

He actively supported the KKK and its leader for decades. 47 years in “government service” with zero accomplishments on his resume. Somehow has amassed a fortune of tens of millions of dollars and 3 mansions, on a government salary. After his wife and 13-month-old daughter were killed in an auto-accident, Biden lies and states for decades that she was killed by a “drunk driver”. This is still his story to this day. The driver was tested for drugs and alcohol and had neither in his system. And the fact remains that Biden’s wife pulled out from the stop sign in front of the truck. She ran the stop sign with oncoming traffic coming. FACT! But don’t let the facts sway you from Joe’s lies.

Oh, by the way, Joe Biden then married Jill, the family baby-sitter soon afterwards. How convenient that his wife died leaving him to his young lover.

One would think that this person is wholly unqualified to serve as dog catcher let alone as POTUS, and that person would be correct. But this is American in 2022, land of the woke, era of the transgender, the domain of BLM and Antifa.

Joe Biden is the US President, and he clearly hates half of America, and has repeatedly proven this with actions. But until now, never with words to the nation. He said the unspeakable this past week. Just as the delusional NY State Governor Hochul said that Republicans are not welcome in New York, and she invited them to leave, Biden says Republicans are not welcome in America and must be taken care of properly.

He gave a speech reminiscent of Hitler, 18 minutes of tirades and rants against the opposition party, and not one word about the state of the nation. This was supposed to be his “healing moment” we were told, when he was going to bask in the glory of asking all Americans, regardless of color, creed, income, sexual orientation, job status, vaccination status, etc. to come together as one nation, as Americans.

But it was anything but. He instead went after Trump, people who voted for and/or agreed with any of his policies.

MAGA = Make America Great Again. Why is that a bad thing? The Democrats run on “Make America Venezuela” and Biden is OK with that, but to make America better? No freaking way says Mr. Crack Pipe giving man. What other American President actually gives crack pipes to crack addicts? This is insanity. But we’re living it, daily.

But even though, in a primetime speech, carried live, with literally tens of thousands of people having recorded it, Biden turns around a couple of days later and says he NEVER said that. He gives us his best, and only look, which is of a doofus dumbass that doesn’t have a clue, and says “I don’t consider any Trump supporter to be a threat.” This coming a mere 24-hours after Biden tweeted “Donald Trump and MAGA Republicans are a threat to the very soul of this country.”

That really doesn’t sound very nurturing now, does it? It in fact sounds hateful and threatening. It seems as if Biden is setting up Republican voters as targets for Antifa, BLM, the IRS, the DoJ, the FBI, and whatever other alphabet agencies decide to bow to Socialism.

Adolf Hitler did the exact same thing to the Jews in pre-WWII Germany, and their state media, just as ours, is kowtowing and demonizing the opposition party of the Dear Leader. It is demonizing repeatedly, working up their base to finally take action. Joe Biden’s team touts him as the “Great Uniter” or the “Great Healer”, but he has turned out to be a dangerous, degenerate, lying grifter.

The hundreds of riots of 2-3 years ago are nothing compared the violence and mayhem Biden is about to unleash upon us, us being anyone that didn’t vote for Biden. Only this time, we won’t just remain victims. We will be pushing back.

Take that to the bank BLM and Antifa.